On Feeling Afraid and Finding the Edge 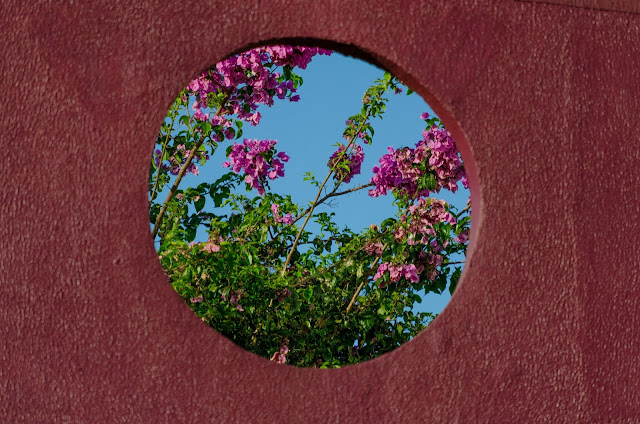 This is what I asked my husband the other day as I swept up spilled cat food in our bedroom and he sat on the bed, watching. We'd gone upstairs to talk about knocking out a wall.

I’d gotten the urge that morning. Stepping out of the shower, I'd thought, Let's just knock out that wall.

The wall in question - which divides our bedroom into a small room main room and a pointless hallway - has been slated for demolition for some time now. But it's taken a back seat again and again to more pressing projects, like making a standing shower and putting in a dishwasher.
Recently, adding a shower to our make-shift downstairs bathroom has been at the top of the to-do list, but progress has been stalled by indecision and the awkward limits of several poorly placed windows and cast-iron radiators in the room to be remodeled. Neither of us can think of a layout that makes good use of the space and doesn't leave us feeling unsettled. In short, we're afraid to move ahead.
Which, looking back, is probably why I jumped to the more immediate option of knocking out that dang wall. Knocking out a wall feels so clear, so simple, so satisfying.

Of course, knocking out that wall will force us to deal with the fact that the ceiling in one part of our bedroom is lower than the other, as is the floor. And there’ll be radiators and some wiring to work around. No project in a 100+ year old house is ever simple.
But when you're feeling afraid, I've found, sometimes you need to just find the nearest edge and jump.
//
"Do you ever realize how often you feel afraid?" I asked.

"Sometimes," I continued, "it's like I'm afraid almost all the time."

Our conversation moved on to other territory, but here I am, still thinking about fear and its subtle sway.

I'm not talking about heart-pounding, fight-or-flight fear. But rather the dull constraint of corners cut out of safety's concern. The fear of failure, even on the smallest scale. The fear of even naming the fear that drives us for fear that this too will be seen as weakness unendurable. A fear so subtle it's easy to rationalize, easy to miss.

When I notice this fear in myself, I try to balance it by asking, "What would love say?" Love and fear have patently different voices, markedly different concerns. Sometimes, this question alone, is enough to shake the dark cobwebs and return me to the life-giving freedom bought by Christ.

Other times, forward motion helps. Knocking down the closest wall, diving off the nearest edge, and finding, in the falling, the momentum needed to soar.

Posted by kchripczuk
Email ThisBlogThis!Share to TwitterShare to FacebookShare to Pinterest
Labels: fear