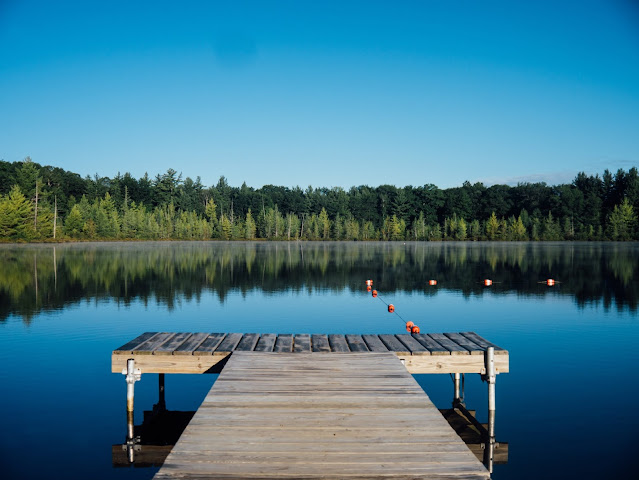 I decided I would swim every day we were there.

That was Sunday night, after we arrived and ate dinner at the little cottage we were renting along a private lake. The kids hit the water that night, but John and I sat on the shore watching – grateful to have arrived, grateful for a moment’s distance between us and four kids.
I didn’t swim that night, but I promised myself I would, every day, for the rest of the week of vacation. And I did.
I swam because I remembered, vaguely, my spiritual director saying something about swimming being a spiritual experience. I swam, despite the fact that my daughter called out in semi-sincere astonishment every time I slipped off of my teal green float to glide through the murky brown water. “Look! Mom’s swimming!” she cried, as though she had spotted an endangered species or witnessed a rare comet shooting through the night sky. Every afternoon, I swam, and my kids circled me like piranhas, staying within a five-foot radius despite the depth and breadth of a 50-acre lake at their disposal.
//
Swimming immerses us in an alternate reality. The body, heavy on shore, is lighter and sleek. And yet, a swimming person often looks very close to drowning. The human body, even afloat, sits low in the water. The open mouth, pulling in air, hovers just inches above the surface.
Swimming reminds us that the difference between sinking and floating lies in the smallest adjustment of posture. In the water, we don’t have to do great things to make waves that ripple far and wide.
Maybe some of this is true on land as well.
//
I swam every day of our summer vacation, even taking my turn at jumping off the plastic floating dock, plunging into the cool darkness, and coming up into the light with my sinuses filled with water. Swimming back to shore, my head low like a crocodile, I remembered the little girl I once was, the one who “swam like a fish” in the cool, brown lakes of central New York. I thought about how major changes in movies and books are so often heralded by immersion in water, a baptism via rain or river. I prayed quietly then, words slipping through my heart as my body slid through the water, that some change would cling to me, some doorway to a new beginning, even as I bid the lake farewell.
I swam every day.

Questions to Carry: Is there a change you long for, a baptism into something new you can't quite name? Is there some way you could pair your longing with a small, intentional, embodied practice - like swimming or sitting on a swing or gazing at a flower? Perhaps your perspective would be broadened if you committed to one small immersive experience on a daily basis - even just for a week.
Posted by kchripczuk No comments:
Email ThisBlogThis!Share to TwitterShare to FacebookShare to Pinterest
Labels: contemplation, dayliness, embodied, practices

They Left Their Nets Behind 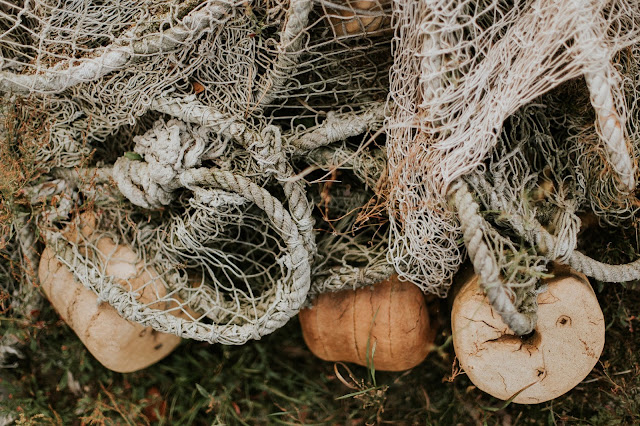 From that time Jesus began to proclaim, “Repent, for the kingdom of heaven has come near.” As he walked by the sea of Galilee, he saw two brothers, Simon, who is called Peter, and Andrew his brother, casting a net into the sea - for they were fishermen. And he said to them, “Follow me, and I will make you fish for people.” Immediately they left their nets and followed him. . . Matthew 4:18-20
Inheritance is the word we use to describe the things, tangible and intangible, that are handed down from generation to generation. I imagine a fishing net, in the time of Christ, was one of those things cast down from father to son. A son didn’t choose to be a fisherman so much as he was caught in the net, entangled in its destiny like his father and his father’s father before him.
I imagine the women in each family – wives, daughters, sisters – mended the nets, perhaps winding linen fibers into rope. Everyone’s hands worked the family nets; everyone’s mouths fed on their harvest. The net, like the sea and the fish in it, stood at the center of life – a mingling of the past and the present, a clear path leading to a predetermined future.
Simon and Andrew’s hands likely bore the mark of their nets. Their faces and hair were shaped by the wind and sun on the Sea of Galilee, and so also their hands would have been calloused and scarred from gathering and tossing the heavy, wet fibers. Yet when Jesus came, announcing the kingdom of heaven, Simon and Andrew left their nets behind.
It’s almost as though Jesus, walking along the shore, saw them struggling there like a pair of fish tangled with no means of escape. Then, with ten simple words, Jesus cut them free. “Follow me, and I will make you fish for people.”
The possibility of a break with the past emerges.
The door to an unimagined future swings wide open.
They left their nets behind. The callouses, the scars, would stay to remind them. But, they left their nets behind.
Questions to Carry: What fixed ideas or practices have you blindly inherited? What might you be called to leave behind as you follow Jesus? Ask God to help you discern what no longer serves you well. Listen for Jesus’ own words or invitation to you.
Posted by kchripczuk No comments:
Email ThisBlogThis!Share to TwitterShare to FacebookShare to Pinterest
Labels: contemplation, scripture, surrender
Newer Posts Older Posts Home
Subscribe to: Posts (Atom)