Difficult Women: St. Joan of Arc, Zinnias, and Me 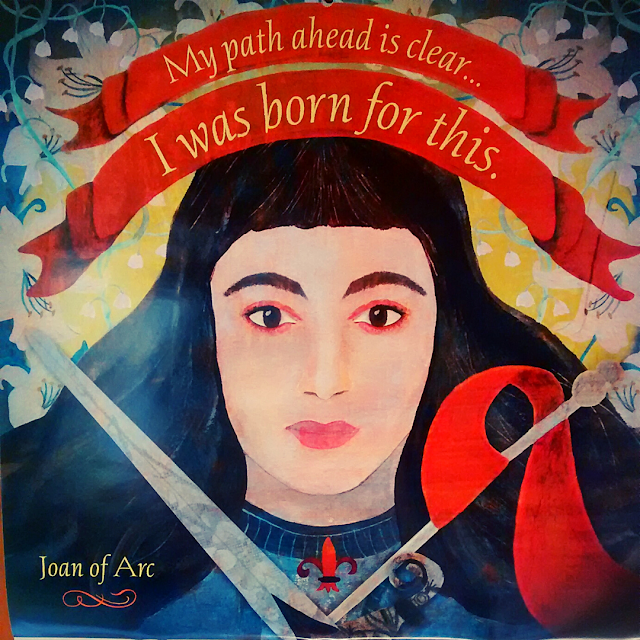 Art by Rachel Grant in the 2020 Women Who Rocked Our World calendar.

Every man gives his life for what he believes. Every woman gives her life for what she believes. Sometimes people believe in little or nothing, and so they give their lives to little or nothing. One life is all we have, and we live it as we believe in living it . . . and the it’s gone. But to surrender who you are and to live without belief is more terrible than dying – even more terrible than dying young. - St. Joan of Arc

I’ve been sharing office space with Joan of Arc for the past month as she stares out at me from the August page of my Women Who Rocked Our World calendar. The artist’s image, paired with a quote, conveys an air of certainty and defiance, a sense of strength rooted in something beyond the realities of the world in which she lived.

A brief bio at the bottom of the page reads, “In a time when only men had power or choice, Joan of Arc commanded both. ‘I’ve arranged your marriage,’ her father said. Joan refused, changed into pants, cut her hair, and called herself Joan the Maid. She proclaimed her God-given destiny was to free France from the English invasion.” Joan led the army that restored France’s king in the early 1400s, only to be captured and executed two years later by a church heavily influenced by her former military enemies.

I never had any real interest in Joan of Arc until I wrote a paper on her for a seminary class on Medieval Female Mystics. It was one of the few papers that pushed me beyond the bounds of the seminary library and sent me across the street, hunting through the dark stacks of Princeton University’s library. I read everything I could find and wrote an extensive paper based on the idea that Joan of Arc represented an early proponent of Liberation Theology. It was a stretch perhaps, a bit of a convoluted hypothesis, that produced the only B grade of my whole seminary career. All of that to say, Joan and I go back awhile, but I’m no expert on her story.

Reading the quote from my calendar, I realize the artist and author are doing something similar to what I did, coopting Joan’s story for a cause (feminism) that came much later than her brief and complicated life. In doing so, they raise an important point – Joan of Arc broke out of the expected feminine constraints of her day.  But they do so at the risk of confusing Joan’s motivation – Joan of Arc was called by God to deliver the French people living under an oppressive English occupation. This is the reason for her certainty, the reason for her throwing off expected social constraints.

I’ve been thinking lately about “difficult women.” Women are branded as “difficult” in our culture for any number of reasons – for speaking clearly, for refusing to bend to abuses of power, for advocating for change that is inconvenient to the status quo. The label “difficult” is meant to be pejorative. But I’ve been wondering lately whether the label, “difficult” might be more of an honor than a disgrace.

Joan of Arc, with her level-headed stare, and unwavering belief strikes me as a “difficult woman.” Her clarity, calling, and conviction are rooted in the voices of saints that she alone can hear. She has no proof other than her life, which she gives wholeheartedly and without restraint.

There are zinnias the size of salad plates in my garden this year - fat magenta petals flung wide atop of thick, green stalks. The stems are hearty and bristle with course hairs and the biggest flowers stand tall, with perfect posture, declaring themselves to the world.

I’ve been sharing heart space with those Zinnias this month, just as I share office space with Joan. I feel drawn to the garden to visit them. I feel loath to cut them for a bouquet or bring them inside. Those Zinnias stare me in the eye, as Joan does, in turns challenging and inspiring me with their clarity and certainty. My heart hears those zinnias proclaim, “My path ahead is clear . . . I was born for this.”

Those zinnias, like Joan of Arc, stand tall and confident because roots that dig down deep, drawing strength from unseen places, pushing past constraints, and living as they were made to, for as long as grace is given for them to do so.

I'm sharing space this August with Joan of Arc and those giant Zinnias. I’m listening to the invitation to grow deep roots, to live with clarity and conviction, to shine bright and uncompromising, like a woman in military garb, a zinnia in fuchsia standing with its face turned toward the sky. I'm letting the label, "difficult," fall where it may, and living as I believe, whatever the cost may be.