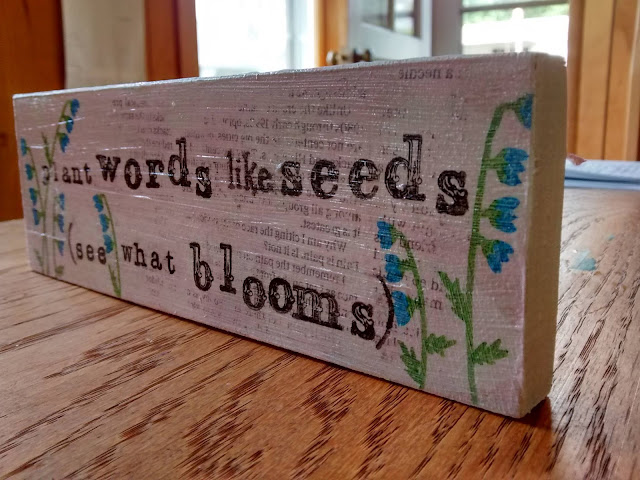 It began with open space.

Maybe, that’s how all things begin.  All good things, that is.

And, it began with need which, so often, provides fertile ground for creativity to take root.

This is what I remembered as I sifted back through layers of memory and experience, this is the conclusion I reached when someone asked, “How did you begin painting?”

I never intended to paint, that was not the point.  But when we moved to this enormous, old farm house three years ago, I found myself with rooms full of empty wall space and nothing to hang.  Need (or was it desire?) knocked and I answered.  I splurged on one large print from Ikea and two empty frames which I filled with fabric in a color scheme I adored.  But our budget would not allow for more.

I kept my eyes open, though, and found ornate and tacky old paintings abandoned along back woods roads and languishing in thrift store bins.  I bought acrylic paints in magenta, teal, and tangerine.  I, like generations of women before me, decided I would ‘make-do’ and I did.

In the process of making-do, though, I discovered that painting felt like prayer – calm, clear, and filled with listening.  Painting, also, felt like writing, and I listened as I painted and learned about myself as a writer, as a creative, as an artist.

All of this, from blank walls, empty space.

I never intended to paint.

But now I know that words on wood, in color, is part of who I am.  Those empty walls called forth some part of me long buried like a seed, causing the artist in me to sprout and blossom.


Now I continue to watch and wait, like a gardener eyeing empty soil.  What open spaces are here, now and what abundance might be sleeping in the rich, dark emptiness? 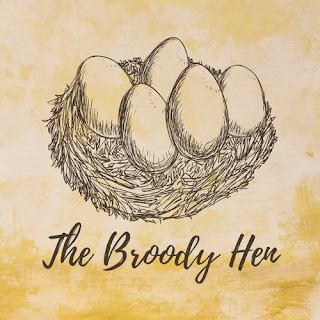 Good news, friends, I now have an Etsy shop where you can order prints of my original paintings.  Visit The Broody Hen Shop to see current offerings.
Posted by kchripczuk 3 comments:
Email ThisBlogThis!Share to TwitterShare to FacebookShare to Pinterest
Labels: creativity, emptiness, painting, spaciousness

Mail Worth Crossing the Road For . . . 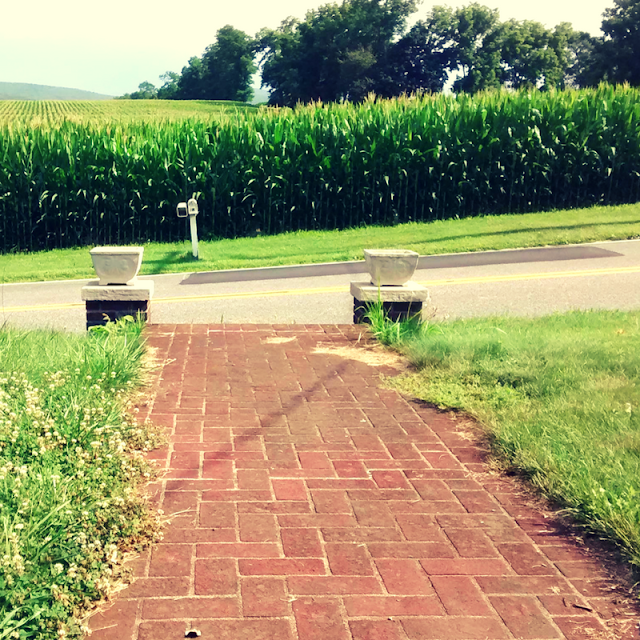 Our mailbox sits across a busy state road from our house.  It's an old metal box equipped with a nifty yellow flag that pops up whenever the door is opened.  This way, we can tell at a glance, whether the mail is here yet.

I never cross the road unless that flag is up - it's that reliable.  But sometimes, when the yellow flag beckons, I brave traffic, rain or snow only to discover a handful of junk mail - a flyer from a credit card company or a weekly bundle of local retailer flyers.  Those days, I feel disappointed, and like a little bit of a sucker.  I was looking forward to something good - or at least something useful, but instead I risked my life for a few pieces of paper that will go directly into the recycling bin.

Maybe you know the feeling?

What if I could promise you one piece of mail each month that didn't disappoint?  I want to invite you to sign up for my newsletter, Quiet Lights, where you'll receive more of the same writing you've come to expect here on This Contemplative Life.  Quiet Lights is bi-monthly (during the school year) and has slowed to once a month over the summer.

No spam, no junk mail, just a few good words straight from me to you.  Sound good?  You can sign up right here to get the latest post :


Now, if you'll excuse me, the yellow flag is up across the street and I've got my fingers crossed that it's something good today.

A Hare, A Shovel, A Pale Blue Envelope 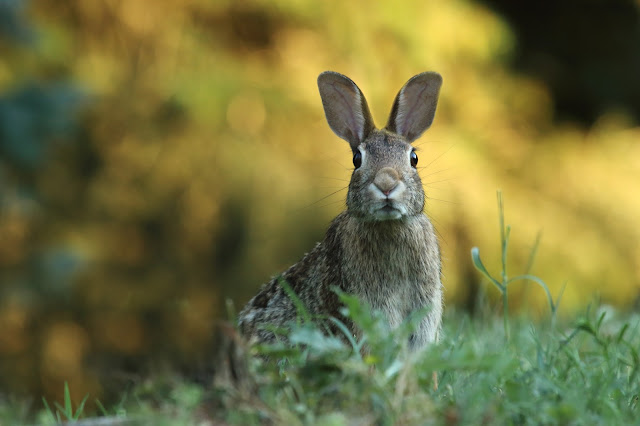 I walked out the back door and circled around toward the front of the house one recent Saturday morning, looking for the shovel.  I suspected it had been left leaning against the porch after a recent gardening project.  A few weeks earlier, we had pulled out yet another dying shrub and planted a few annuals.  The annuals – mostly Zinnias and Sunflowers sown from seed – sprouted and grew about an inch tall, then disappeared.  We figured someone ate them, most likely a rabbit.

I was hunting for the shovel so I could plant some things in another flower bed, this one beside the Little House.

I walked down our paved driveway toward the road and noticed the yellow metal flag on our mailbox across the street was standing at full salute.  I saw no sign of the shovel along the porch and continued toward the road, aiming to fetch the now day-old mail.  Along the shoulder of the road, just in front of the mail box, sat a large, speckled hare.  I figured it would run off as I crossed the road.

The rabbit stayed still, though, as I approached.  Beyond the mail box, the gravel and grass gives way to a giant field of feed corn, a tide of green that rises slowly each day.  I stopped, just beside the rabbit, my sandal-ed feet pausing in the small strip where grass and gravel collide.  The rabbit's eyes bulged.  They were enormous, not right at all for a hare its size, and its breath came in short heavy pants.  The fur along one side of its body was rumpled and I leaned down to look for injuries.

I couldn’t see any blood, so I reached down with my right hand to feel the rabbit’s back.  Its speckled fur was coarse and dense.  I gently pushed the rabbit toward one side, then another, looking, again, for injuries.  I wondered at its bulging eyes, were they rimmed with blood?

Observing the hare, with its unknown injuries, I felt a familiar weight of responsibility descend.  I considered picking it up and carrying it to the house.  It would likely die before long, but I hated to think of it struggling through its last hours on the side of the road with the sun beating down.  Also, there was our dog to consider, and the cat – I didn’t want them crossing the busy road to catch it.

I turned to the mailbox, pulled out our mail, and locked down the bright yellow flag.  I noted a pale blue envelope – real mail, not junk – wrapped in the day's advertisements and crossed the street, heading back to the house.

I decided to get a towel to carry the rabbit.  Once it was safely inside, I'd ask my husband to take a look at it.

Walking toward the house, I reflected on the foolishness of nursing a hare to health.  I, who routinely stands along the fence kvetching with our neighbors about the havoc rabbits wreak in gardens and flower beds.  I remembered the plush Angora rabbits I recently petted at my friend’s farm, their dense cashmere-like coats so different from this wild hare’s hide.  Mostly, I hoped the kids wouldn't catch wind of the rabbit before I could decide what to do with it.

It was the first morning, in over a week, that all six of us were home together.  To celebrate, I had gone to the grocery store after work the night before to buy Buttermilk, intent on wowing us all with a new pancake recipe.  I envisioned a delicious, family breakfast, but the recipe was a flop and I gave up on the lumpy bowl of batter after producing a few half-cooked pancakes with a texture like silly-putty.

My husband, John, was in the hot kitchen trying to salvage my mess.  I found him there and lured him outside to explain the rabbit situation.  Armed with a beach towel, and fully prepared for a rescue operation, I led him across the road.  The rabbit was still there, but had moved a little, turned toward the field of corn.  John guessed, by the way it moved, that its foot was broken.  He also commented on the bulging eyes.

“Can rabbits get rabies?” he asked.  He didn’t want to touch it.  I mentioned I already had.

I bent down, then, to look at its face and saw that its nose was bloodied and raw.  “Its face is bleeding,” I said.

“Should I throw it out into the corn field,” he asked, “or get something and just hit it so it dies?”

“I can’t find the shovel,” I said as we crossed the road together.

It seemed we had come full circle.

He found the shovel, I know not where, and headed across the street with it and a plastic bag for the body.  But he returned, soon, with the empty bag.  “It went off into the corn field,” he said.  “It was already pretty far out.”

Afterwards, I stood in the disastrously dirty kitchen, leaning against the counter, and opened the pale blue envelope.  It held a card with a small pile of cash tucked inside along with the signatures of three dear friends.  They had asked, a few weeks earlier, whether we would accept a little money to help us do something fun with the kids this summer.

When I think of these two events - the injured hare and the pale blue envelope - coinciding, I am reminded of one of my favorite poems, 'Shoulders,' by Naomi Shihab Nye.  In her poem, Nye describes a man cautiously crossing a street in the rain.  The man carries his sleeping son.  As he walks,

"His ear fulls up with breathing.
He hears the hum of a boy's dream
deep inside him."

Nye concludes her poem with a prediction,

"We are not going to be able
to live in this world
if we're not willing to do what he's doing
with one another.

The road will only be wide.
The rain will never stop falling."

Nye's poem gets at the heart of what I was doing that Saturday, what my friends were doing through their inquiries and gift.  We were each crossing the street, pondering how another's need might intersect with the abundance of our own lives.  It's not like I heard the hum of the rabbit's dream deep inside me, but I did hear the hum of a deeper truth.  All of the many roads that divide us are nothing compared to the impulses of Love and Compassion that bind us all together.