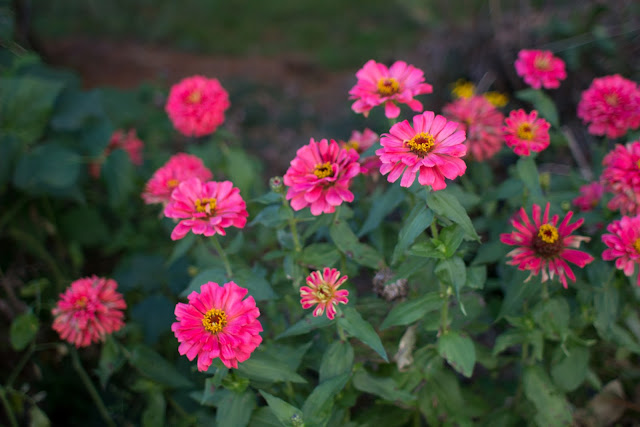 Sunday afternoon I left my husband with seed packets of Zinnias and Dahlias and walked up, across the yard, to look for a spade in our overflowing garage.  The planting of those flowers, four packets, was what I requested for Mother’s Day this year.

I don’t know why planting seems, for me, an impossible task.  Maybe it’s that simple act of letting go and watching the impossible seed fall into darkness; maybe it’s the familiar struggle of facing an unknown future.  Whatever it is, my husband plants the garden each year and I, in time, tend it.

Walking up from the garden, across the green expanse of lawn, I looked over at our neighbor’s yard.  They have a small, fenced in, vegetable garden and the wife, Ann, has a separate flower garden.  Their garden, like most in early spring, is a miracle waiting to happen – a tilled expanse of soil, a pregnant pause.  My eyes saw the emptiness there, the open waiting space, but in my mind I remembered the Zinnias.

During our first summer here, we planted a good-sized vegetable garden filled with the practical means of nutrition.  Our neighbors did the same in their fenced-in plot, but around the outside edge of the fence grew large, splashy, red, purple and pink flowers – a fiesta of color that started blooming in late summer and stood strong into the fall.

Oh how I envied Miss. Ann's Zinnias.  I eyed her flowers hungrily and finally, in September as the flowers were beginning to fade, asked if I might over and cut a bunch.  From that moment on, I was hooked.

The following summer, I bought a packet of seeds and grew my own riot of reds and pinks.  I cut them and filled our house with vases.  I carried them to friends’ houses.  Everyone loved the Zinnias.

Then, last year, we made a farm stand for selling fresh, free-range chicken eggs.  I again planted my Zinnias (or rather, my husband did) and, when they grew and bloomed, I started cutting large happy bunches of purples and pinks, oranges and yellows and selling them in old tin cans at the farm stand for $1 each.

It was a real steal for fresh cut flowers and they flew off of the farm stand’s two tilted shelves.  A friend suggested I should charge more.  But I refrained.

I was already making a profit, but, what’s more, I know what it’s like to not be able to afford fresh flowers.  I know, also, how beauty feeds the soul.  I also know the feeling of finding a wonderful deal, how it opens our hearts and minds, makes us feel the expansive mystery of goodness and provision in the world that’s so often buried in layer after layer of unmet need.

I wanted people to feel what I felt in my garden, the sensation of wonder and delight, the absurdity of so much color available for mere ornamentation.

Returning to the garden with the trowel in hand that Sunday afternoon, I thought, the kingdom of God is like those Zinnias.  The Kingdom of God – heaven in our midst – blazes and waves in the place where it is planted.  It attracts the eye, captures the heart, fills those who are awake enough to notice, with longing.  The Kingdom of God is like a packet of seeds, bought for $1.49, that yields one hundred fold.  The kingdom of God is color cut and watered in an old tin can, bright joy on the side of the road bought with a handful of change – a deal too good to be true.
Posted by kchripczuk at 8:04 AM
Email ThisBlogThis!Share to TwitterShare to FacebookShare to Pinterest
Labels: beauty, gardening, grace, scarcity and abundance