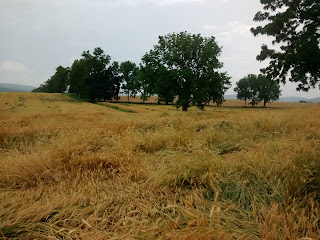 (This is one of my favorite old posts from year I started blogging. The twins were just over a year old, Solomon was four and Sophia was six.  Enjoy!  And my you find hope for your own moment by moment journey from death to resurrection.)

It was rainy and cold and we were keyed up and worn out from being trapped indoors for two days by Hurricane Sandy.  I woke up late and squeezed in a shower while the twins, still in dirty diapers from the night before, wandered around the living room.

Their whining amplified to full pitch when my shower cued them in to the possibility that I’d be (gasp!) leaving for the morning.  The preemptive separation anxiety continued through breakfast and packing everyone into the van to take Sophia to school.

After drop-off I carted the remaining three kids back into the house.  We mulled around, waiting anxiously for the babysitter who was coming to stay with the twins while Solomon and I went to his preschool class's Halloween party at a local nursing home.

The twins settled for a few minutes, their anxiety lulled by the fact that I had yet to leave them and Solomon's anxiety about the party simultaneously rose in direct proportion to their calming. Following me through the house, he peppered me with nervous questions,


“Will there be people from the nursing home in the party?” he asked.

“Will they see me in my costume?” he asked.

“Are you going to dress up?” he asked.

“Then, I don’t want to wear a costume,” he declared.

I had been dreading this party from moment it was first mentioned, knowing that my son, so robust and cheerful at home, would be shy and clingy surrounded by strangers in a new place.  Committed to accompanying him, I had hired a babysitter for the twins, despite my own teeth-clenching, foot-dragging antagonism toward it all.
“Solomon,” I said, “what if I wear a costume too?”  Then I emerged from the back room wearing the fuzzy black antennae from my daughter’s ladybug costume.


Then, I felt myself giving in, letting go a little more.  “What if I’m a ladybug?" I asked.  "I can steal Sophia’s costume.”

He approved of my decision and I had just enough time to gather the red and black-dotted wings and my camera before the babysitter arrived.  Isaiah dissolved into a raging stream of tears, protesting my impending departure.  I ran in circles grabbing the rest of the things we needed, carrying Levi in my arms and nearly made it out the door with him, but the sitter stopped me just in time, grabbing him from me with the words, “This one’s staying here.”

Then we were off, on our way to a party I don’t want to go to, but also don’t want my son to miss.  We drove through the rain to the nursing home and found his classmates in a large room coloring at a table while elderly people in wheelchairs sat in a wide circle around them.  The residents watched the children, their eyes hungrily absorbing the beauty and innocence, the luxury of so much youth in one small space.

Solomon was clingy, shy and tired, overwhelmed by the noise, the crafts, the games.  But I did my best to get into the spirit of things.  I helped with glue and tore bits of tissue paper for a craft.  I assured a child that it didn't matter where he put the eyes on his pumpkin.  I laughed with the other Moms over the resident who rode in on a wheelchair, pretending to scare the kids with a mask, all the while giving a growing peep show as his robe slid further and further open.  I posed for a smiling picture with my son, a little Iron Man snuggled up on a ladybug's lap.

By the time we returned home, though, I was over-stimulated and frustrated at my inability to love Halloween, to love loud parties and candy.  The twins were exhausted and hungry and when I walked in the door they flew to me like magnets, pressing their tiny bodies onto mine in desperation.

It was all I could do to untangle myself from them, causing more tears and desperation, as I headed to the kitchen to make lunch.  Solomon started sorting and dumping the morning's haul of candy, dancing and singing and blowing the whistle from his party bag while the twins screamed from their highchairs, desperate to convey how deeply my had absence wronged them.

Then I yelled, “Stop it!” and threw an apple-peel all the way across the kitchen.  It hit one twin and bounced off and they both sat staring, shocked into silence and my son, that sweet four year old boy, offered to play his whistle to settle them down.

There are days when being a mother feels like dying a hundred tiny deaths.  One hundred letting-go's, a thousand surrenders to more noise, more movement, more demands than I feel capable of handling. I’m not complaining, I just want to be honest about the stretch of motherhood and how quickly, how fiercely, I shrink back from it.

I died a hundred little deaths that Halloween morning.  But I know, thank God, that this dying, this surrender, makes me new again.
I may die a hundred times a day, but I'm just as often made new, reborn in the face of a chubby, gap-toothed grin, a gentle hand seeking mine for reassurance.  That morning I was resurrected by Solomon's voice calling cheerfully from the back of the van as we made our way home, “I can’t wait to be old so I can go to the nursing home to live.”

Later in the day I made chili to share with friends who're coming trick-or-treating with us.  While the twins again stood whining at the gate that divides them from me, my Dad called with the news that my maternal grandmother had died that morning in the nursing home where she lived for years in North Carolina.

Standing over the stove, stirring the chili, I found myself surprisingly grateful.  Grateful that, although I couldn't be there with her, I was visiting a nursing home here with my son, the very same morning.  I thought of my Grandmother's life and the many little and big deaths she endured.  I thought of the ways I get so focused on what I'm giving up, that I nearly miss what I have right here, right now in front of me.  It occurred to me that I live such a grace-filled life, full of opportunities for surrender, continually pressing me toward the edge.

I finished dinner and the older kids and my husband came home, and poor Isaiah, who just couldn't seem to pull himself together, sat crying on the floor.  I scooped him up and settled into the rocking chair and watched as he drifted into a heavy sleep.  I loved that moment - the rocking, the sleeping child so sweet.

Then Isaiah lifted his head and looked around, disoriented, before throwing up all over both of us.  Leaning forward, exhausted, he laid his head back on my chest with the pile of warm, smelly goo spread like a layer of glue between us.  I died again in that moment and rose again to hug him tight until my husband came to help us both get cleaned up.

Every day of the dead, every Halloween, gives way to all saints day and I wonder if we too, dying in our little and big ways, aren't also being moved, continually, from death to new life.  This dying is a surrender, a stripping bare until all that remains is love.

Hey-all!  The kindle version of Chicken Scratch: Stories of Love, Risk & Poultry is now available for pre-order on Amazon!  The launch date, November 7 is just a week away!  And here's a fun little chicken meme for you to share. 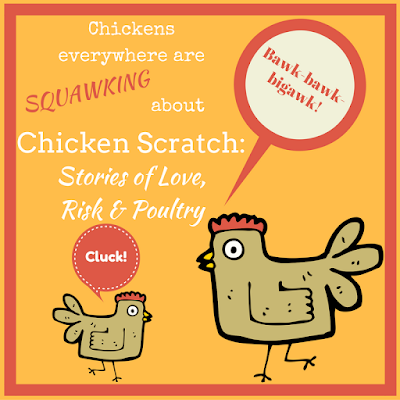 Posted by kchripczuk
Email ThisBlogThis!Share to TwitterShare to FacebookShare to Pinterest
Labels: #SmallWonder