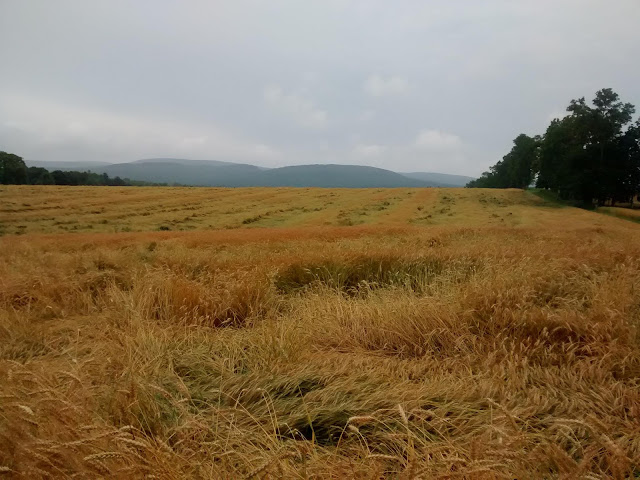 Saturday morning our kids were all away at sleep-overs.  John got up early and brought two cups of coffee back to bed.  When I stirred from my nest of sheets and sun, he asked, “Are you ready to hear about what I saw this morning?”

I guess I must have been ready because he told me how he let the dog out the back door, then went to the living room and looked out the big front window.  Across the street, the field has gone from green to gold and on the porch, two cats - one black, the other calico - sat facing the field.

We have one cat, Blackie, who wanders outside, the other, Perfect, is skittish and  rarely ventures from her self-imposed seclusion in the second story of our house.  When she does manage to make it outside, she ends up hiding in the garage, pressed out flat on the shelf formed by the open garage door.  Most of her adventures end with me on a ladder, coaxing her down, then carrying her back inside.

Seeing the cats, he went to the porch door and opened it.  Then he saw one cat, trotting off calmly down the road and Blackie sat alone on the porch.  We puzzled for awhile over the cats.  He was certain it was Perfect he saw on the porch and the cat trotting away looked an awful lot like her too, but “trotting off calmly down the road” isn’t in her repertoire.

The more questions I asked, the more his story started to fall apart.  Blackie spent the night outside, that much we knew for sure, but I thought I saw Perfect in the morning.  How did she get outside with the doors and windows locked tight all night?  Maybe a third cat was involved?

“This story is starting to sound less and less believable,” I said.

“Next you’re going to say, ‘Then, along came a tiger, wearing pants, riding a unicycle.’” I said.  “And then I saw an elephant playing a banjo,’” I mimicked.  “This is starting to sound like a Dr. Suess book.”

I worried about Perfect all morning.  I scanned the rooms upstairs and quietly circled the garage calling her name and listening for an answering mew.  John cut out a cabinet in the kitchen and I worried the deafening sound of the circular saw would terrify her.  I trimmed shrubs around the house, hoping to find her cowering in their cool shade.  When we went out to lunch, we left the screen-less window open and the mud room door, hoping she would ease her way back home.  After lunch I found her back inside on the upstairs landing, jumpy and out of sorts.  She’d clearly had an adventure.

Later we decided to wash the dog.  After trying to coax her upstairs and tugging her on a leash, John gave in and carried her to the upstairs bathroom.  Coco loves to go upstairs, but refuses to because the black cat guards it with growls and hisses and razor sharp claws - the upstairs is Perfect’s Oasis and Blackie likes to keep it that way.

John set Coco her down in the bathroom and I shut the door, then we trimmed her fur with the electric clippers, focusing largely on her tail and hindquarters.  I hugged her body, holding her still while John trimmed her heavy wool coat.  She didn’t like it and skirted away when she could, but we cooed and praised her and she was torn between her dislike of the clippers and enjoyment of the attention.

Satisfied with her haircut, we turned on the hand-held shower and John lifted her into the tub.  She shrank as the water soaked her coat.  She raised a tentative paw and looked longingly over the side of the tub, but stayed put under a steady stream of warm water and praise.  “Good girl, good girl, Coco,” we chirped.  I drizzled shampoo down her back and John scrubbed, clucking and singing over her like a mama bird over her chick.  Then the rinsing began and we exulted in the streams of dirt pouring down the long white tub toward the drain.

Crouched there beside my husband on the bathroom floor I remembered the first baths with our babies, the blue plastic tubs set on the dining room table and filled just so with warm but not hot water.  John is the bath man at our house, taking the honors of those first tentative sponge baths then graduating to cups of water scooped and poured over waving legs and arms.  He cooed and clucked over our babies singing love in half-flat tones and they, much like Coco, endured the alarm of water on skin, pulled along by the attention that poured down from their father’s eyes, his words and hands.

When the dirt was more or less done running down, we turned the water off and I threw a towel over Coco’s head.  John wrapped her and lifted her to the floor where she shimmied and shook with that silly all-over-wet feeling dogs get and we were happy and pleased.

These are a few of the things that happened yesterday on West 1st Street.  The cat got lost and found, the dog got washed and trimmed.  At the end of the day I shut the chickens in the coop and walked slowly back into the house, looking out over all the green glory of this place of goodness we’ve been given.  Then I stepped my bare foot in chicken poop in the mud room and the cool, wet shock of surprise on my foot, the down-to-earth reality of that moment, summed up the day quite well.

Only 16 spaces left!  I'm super excited to be joining with Andi Cumbo-Floyd and Shawn Smucker to organize a weekend writer's retreat this summer at God's Whisper Farm in the beautiful mountains of Virginia.  Visit Andi's website for more info!