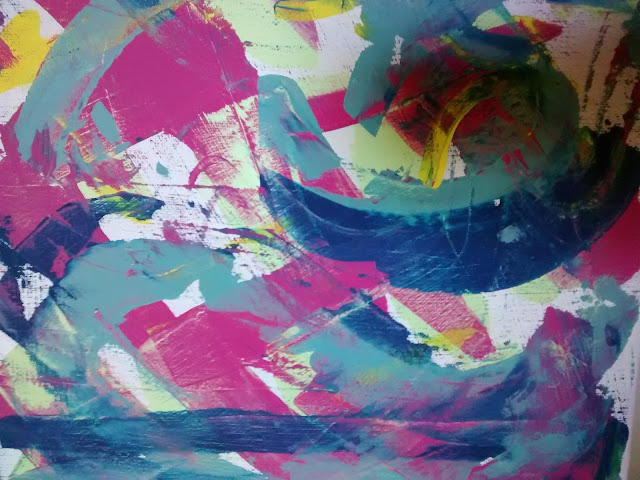 “When are you going to paint?” I asked the one night after dinner.

“When I think of something really good to paint,” she said.

“Then you’re never going to do it,” I said.  She huffed and shot me a deflated look.

The next time we went to the library I stumbled across a book, Painting Lab for Kids.  Each project focused on a specific skill set.  The ideas were bright, fun, and encouraged experimentation.  I grabbed it for me among the usual stack of Geronimo Stilton and Super Heroes for the boys as well as Sophia’s stack of Nature Encyclopedias.  I looked through my painting book quickly one night before bed and saw Sophia paging through it later the next day.

Then one random night in the middle of the week I pulled out the book, some hand-me-down canvases, and dug in.  The project I chose involved layering thick swaths of paint in different colors, swirling, then scraping them to make designs.  I tried it once, it was interesting.  I tried again.

Dipping and scraping, I used an old driver’s license to smear paint, while the kids swirled in and out of the kitchen.

“What are you making?” they asked.

I took a toothpick and carved elaborate flowers in the wet colors.  Then I painted over it, hoping it would somehow show through.  It didn’t and I moved on.  I found a glass jar and began stamping circles, twisting the jar upside-down in two shades of blue.  I liked it, so I kept going.

“What are you doing?” my daughter said.

Miracle of miracles, she did.

The technique she chose didn’t work terribly well and she grew frustrated, but I kept minding my own business.  “You can always paint over it if you don’t like it,” I said, over and over again.

Finally, she loosened up.  In the end she found a color scheme she liked, swirling greens, yellows and oranges on the canvas.  She grew pleased with her painting when she stopped forcing it and started playing.  No longer so focused on the outcome, she began to enjoy the process.
We were just playing.

It’s been a week or two since then and I'm feeling the urge to paint again.  I’m eyeing those canvases, wondering if I have the chutzpa to start all over again, painting over the old with something new.

Only 16 spaces left!  I'm super excited to be joining with Andi Cumbo-Floyd and Shawn Smucker to organize a weekend writer's retreat this summer at God's Whisper Farm in the beautiful mountains of Virginia.  Visit Andi's website for more info!