The Napping House (I Don't Have A War Room) 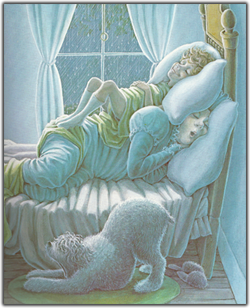 For thus said the Lord God, the Holy One of Israel:
In returning and rest you shall be saved;
in quietness and in trust shall be your strength.  Isaiah 30:15

I sat in the little house with the oil lamp lit, computer in place.  Every coherent thought was echoed by an equally incoherent refrain of fatigue.

The words took on a rhythm, like breathing, while I struggled to work my way through Sunday’s sermon.

Meanwhile, the dog, who technically isn’t allowed in my office, snoozed lightly on another chair.  The black cat lay in the sunshine just outside the office door, flirting with sleep, as cats do.

I have three hours of childcare this week.  Three hours to throw together a sermon, build a power point, harvest the word.  And I was only an hour in with nothing near an outline.

But, come ten o’clock, instead of putting on a third pot of coffee, I pulled the cushion off of yet another chair and threw it on the floor.  A pillow followed, then a blanket and, with gentleness, my own body curled like a dog in its bed.

The dog, whose eye’s slitted open at my commotion, hopped down, tail wagging.  Curious, she ambled over, sniffing at my back, as if to ask, “You ok?” Satisfied with what her nose replied, she hopped back into her chair with ease.

I fell asleep in under five and woke a half hour later.

An elderly friend of mine has operated a retreat house for the past twenty years.  People often speak in hushed tones about the holiness of that space, commenting in awe about its prayer-soaked walls.  And that’s what I envisioned for this little house of mine.

But more than writing, praying or listening, this room has been filled with rest.

I keep a pillow in the cupboard, not a prayer book.  Soft fleece blankets hang over the backs of my chairs, enough cushion and comfort to make a bed for one.

If I can be honest, perhaps I thought this house would be a place where I would build my own kingdom out of words and prayers and God would bless it because of my effort.

But the opposite is true.

In my little house, I cast my efforts aside.

I lay down on a mat on the floor, like a child at nap time.

I rest in the grace of God who doesn’t need my good deeds.  God who says, "Come you who are weary."  Here I enter into the kingdom of God, where the last is first and a little child leads the way.

With the hazy fog of sleep slowly dissipating around me, I sat again in my curved black chair.  The passage was there still, waiting.  But the chant of my fatigue, the undertow of exhaustion, had lifted.  The sermon came, slowly like a gift, like treasure at the end of a hunt.

The dog watched, unfazed by my strange human ways.  When I left the little house to head inside again, the cat followed, meowing, as if to say, “Well, I thought you needed a nap!”