Me and Van Gogh (You Are Not Alone) 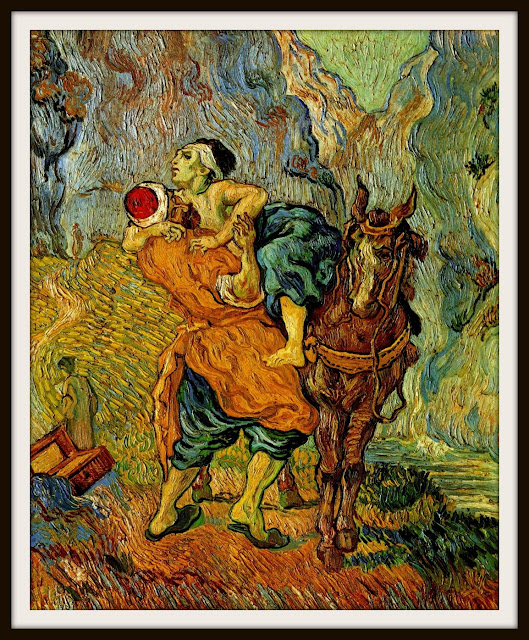 While the kids watch TV my husband and I steal a quiet moment at the edge of the yard.  Sitting side-by-side at the end of the driveway, the garage shades us as we talk about the morning’s sermon.

“I really liked the painting,” my husband says. “It makes me want to have more paintings of gospel stories.  To hang them in the house.”

That morning I spoke on the parable of the Good Samaritan and rather than making a formal power point presentation, I used Van Gogh’s rendition of the story as a visual backdrop to the discussion.

“Yeah,” I reply, “It really helped me when I was preparing.”

It’s one thing to read about acts of love, another to see them laid out stroke, by stroke in rich yellows and blues.

We exchange looks and laugh.

Parker Palmer struggled with debilitating depression.  As did Henri Nouwen.

When I was in the psychiatric hospital last summer, I gathered these names and held them to myself as evidence that mental illness and hospitalization didn’t have to be a stigma.  Their stories gave me hope that despite struggles, my life could proceed with productivity and meaning.

This past Sunday, after reading about his painting online, I added Vincent Van Gogh to my list.

This week I’m approaching what my counselor eloquently referred to as a “tender anniversary.”

A year ago this Thursday I had my first panic attack.  My heart beat furiously, waves of heat and chills ran through my back.  My stomach flopped.  I lay on the living room floor, unable to get up.  I called my husband at work and asked him to pick up our kids and come right home.  I canceled my plans for the weekend, which included preaching, and made an appointment with my primary care Dr.

Still, the panic continued, pulling me under, like a rip tide.  Six days later we woke a friend in the middle of the night, asking her to come and stay with our kids while John drove me to the ER.  The next evening, after a long wait, I was admitted to the Behavioral Health unit.

And lastly, I’m telling you this because I want you to know that you can add my name to your list.

When fear rages and panic sets in.

When you make a difficult Dr. appointment and fill a prescription you’d rather not need.

When you or your child needs to make that scary trip to the ER, to be sheltered for a while until the meds kick in.

Me and Palmer, Nouwen and, of course, Van Gogh.