Crazy (Maybe My Mother-in-law Was Right) 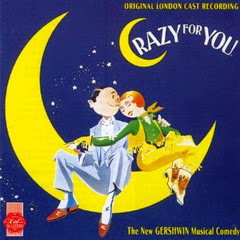 “I have two bad things to tell you and one good," he said.  "Which do you want to hear first?"

“The bad news is, my Mom read your postcard AND she hates the word ‘crazy.’ It’s like a swear word to her.”

What?  Really? I thought.

“The good news is, she liked the bible verses you put on the back.”

During the first summer we dated, I sent John a postcard.  One side showed the cover photo for the musical “Crazy for You” with the play’s title in large letters.  I was completely dumbfounded and not a little offended by the "bad news" and also pleased in a secret way that I’d managed to both impress and offend his mother in one fell swoop.

But really, ‘crazy’ as a bad word?

“We’re just as crazy as them,” my husband said, bleary-eyed in the late-night-kitchen calm, “only our crazy is different.”

He was talking about our good friends, the ones who have three kids and keep a busy schedule of sports, scouts and all manner of fun activities.  I’d never thought about it that way, but immediately I recognized it as true.

Maybe it’s the fact that we’ve gone through two dogs in the past month, or the way that more than one person has suggested we charge admission to our little “zoo.”  Yes, the upstairs of our house is torn to pieces, with exposed beams and wiring in the walls, holes in the floors where our littlest cat (who we strongly suspect may be pregnant) hides.

That’s when I realized - you can’t see your own crazy.

It’s like we all have a mirror we look in to check for signs of crazy, but our mirror’s flawed with incredible blind-spots for the activities, dramas and investments we value most.  Holding the mirror up to others it’s obvious, “Man, they’re CRAZY.”  But us?

Turns out we’re all a little bit crazy, in someone’s opinion.

Over the years, John and I have developed a little code language regarding our own individual levels of crazy - think of it as the equivalent of a subtle hand gesture telling a close companion they have a glaring piece of spinach in their teeth.  This works because, even though you may not be able to see your combined familial level of crazy, a spouse can be very helpful in determining another spouse’s individual level of crazy.

“You’re doing it again,” he says

By now, fifteen years in, I usually know pretty quickly what he’s talking about (depending, of course, on how far gone I am).  By “it” he means “crazy eyes,” this habit I have of talking loud and fast while my eyes ping-pong around in their sockets.  Crazy-eyes are a warning sign for me, a symptom of sorts that I’m heading for the edge.

And you know what?  He does it too.

Maybe he got it from me.

Maybe that postcard really was the warning sign his mother thought it was.

Maybe a certain type of crazy can be transferred from person to person like the plague.

No, that just sounds crazy.
Posted by kchripczuk
Email ThisBlogThis!Share to TwitterShare to FacebookShare to Pinterest
Labels: humor, marriage