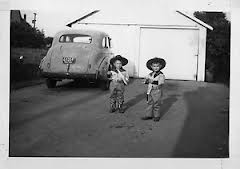 Don't you just love this old picture I stumbled across online?


[The holiday break's officially over and as I headed out to wait for the bus with the older two, the twins were ecstatic to have a few moments to themselves to "steal" something from the kitchen.  I knew this because they announced their plan over and over again all morning long, eagerly anticipating the moment when they would scavenge for gum and candy in the kitchen cupboards.  The thought of getting away with something gives them such a thrill and, since half the time it's a bag of bread from the drawer or a giant stalk of broccoli when my back is turned, I often let them get away with it.  Ah, such is the luck of youngest children.

This weekend we shared dinner with friends who also have four children spread in age just as ours are, but their twins (girls) are about a year younger.  It's always good to be with them, good to remember how it was (just a year ago), to feel that things have gotten a little easier and commiserate on how hard it all continues to be.  All of this brought to mind this old post from 2013.  Enjoy!]

"They crucified two rebels with him, one on his left and one on his right." Matthew 27:38
My 18 month-old twins saunter through the house with swaggering bravado like two black-hats straight out of the lawless west.  Together, they form a mafia-esque crime-ring, a rebellious conspiracy against law and order and decency.  Trafficking in black market goods pilfered from the pile of floor-sweepings in the kitchen corner, they gather on the back of the love seat, perched in the window to inspect and trade their haul.

They rip the heads off of their sister’s dolls and leave graffiti on the living room walls and every time I kneel to zip Isaiah’s coat, Levi circles around behind me and roots through my purse.  A gifted pick-pocket, he snatches my wallet and phone with such speed, stealth and precision that my frustration is mixed with marvel.

When one's finally caught, red-handed, and placed in solitary (ie. the corner) the other comes quickly to the rescue, crouching down beside him, chattering about what I imagine are plans of daring-escape and revenge.  Like true accomplices, though, they quickly turn on each other when caught together at the scene of a crime – a mutually enjoyed destruction turns all finger-pointing and tears when the "fuzz" shows up.

The other day I watched Levi running through the house with what appeared to be a little shiv.  It sported a jagged, plastic tip and seemed capable of inflicting real harm, so I quickly confiscated it, tossing it into the trash.

Lying in bed at night my husband and I hear a “scritch, scratch, scritch” on the bedroom wall near our heads.  Levi’s crib sits just on the other side of the wall so we sleep head-to-head, divided only by a few thin inches of plaster.

We tell ourselves he’s rubbing the nubby bottoms of his footed pajamas against the wall, but listening late into the night, I think of that little shiv and wonder if he isn’t tunneling his way to freedom in a scene straight out of The Fugitive.  Chipping away, one tiny scratch at a time, I picture him tumbling through into our bed some night, his face full of surprise and disappointment to find us there or, more likely, delighted.

These boys are outlaws, I tell you - how can ones so little, so cute, already have a rap sheet a mile-long?   Looking at their round little faces, their hair all downy-fluff, I'm reminded that we’re all thieves, all outlaws of one sort or another, every last one of us.  We’re all Davids and Delilahs, Judases and Peters bent on greed and self-preservation.  We're all convicted, but not condemned, chiseling our way toward freedom, one tiny crack at a time, until at last we fall through the wall to Love.

What's the worst trick you played as a child?  Did you get away with it??


Linking with the community at Unforced Rhythms.