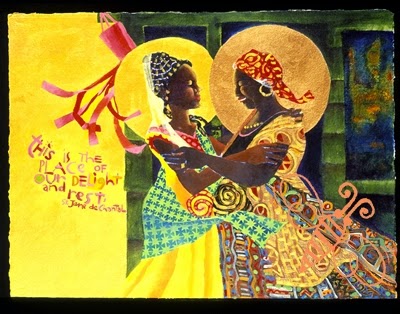 And Mary said,‘My soul magnifies the Lord,    and my spirit rejoices in God my Saviour, for he has looked with favour on the lowliness of his servant.
Surely, from now on all generations will call me blessed; for the Mighty One has done great things for me,
and holy is his name. His mercy is for those who fear him
from generation to generation. He has shown strength with his arm;
he has scattered the proud in the thoughts of their hearts. He has brought down the powerful from their thrones,
and lifted up the lowly; he has filled the hungry with good things,
and sent the rich away empty. He has helped his servant Israel,
in remembrance of his mercy, according to the promise he made to our ancestors,
to Abraham and to his descendants for ever.’
- Luke 1:46-55

From the moment the angel arrived,

despite assurances, a small seed of fear
planted itself at the base of her throat.
Longing and love enabled her to speak
a few short words around it and in their wake
“the thing with feathers/ that perches in the soul”
alighted in her breast and there the two
abode together – fear and hope –
at times, the one winning out, at times, the other.

Who’s to say which aided her more
as her feet hurried along the path
to Elizabeth’s house – the fear that pressed
her from behind, or hope that drew
her like a flame?

It was the sight of Elizabeth,
that wizened woman leaping
with effort to her feet, the great,
round belly swaying its way
toward Mary, that broke the tie.

Mary laughed, a short, sharp
bark that burst past the fear
dislodging it forever from her throat,
like a watermelon seed
spit on a summer's afternoon.

She laughed, like Sarah, the sound growing
as her lips spread wide, white teeth and red tongue
baring and Elizabeth, catching the glimmer
in Mary’s eye, began to sing and sway
in a strange dance, made absurd
by her enormous girth and ripening old age.
Mary giggled, like the young girl she was,
like someone who had nothing left to lose
and everything to gain.

The old woman grasped Mary
by the hand, her own face,
her eyes, spread wide by joy and wonder.
This is when, the story goes, young
John leaped his famous leap, but it’s also
the moment in which the thing with feathers
sprouted wings and sprung from Mary’s soul –
hope flew up her throat, past the red parted lips,
bursting into a song that could not be suppressed.

Mary’s words danced their way over and between them
as they swayed and spun together, two bodies
met in expectancy, one young, one old.
Once the song found wings it was irrepressible;
the words and tune, the strange swaying steps
carried her, always, along the long, dark path ahead.

I'm journeying with John D. Blase and Winn Collier to write on a lectionary text each Monday of Advent.  The truth of the 'word made flesh' is that words touch us each in different ways, in different places.  Visit their blogs, The Beautiful Due and WinnCollier.com to read another perspective on this passage.

Joining with the communities at Playdates with God and Unforced Rhythms.
Posted by kchripczuk
Email ThisBlogThis!Share to TwitterShare to FacebookShare to Pinterest
Labels: advent, birds, hope, joy, poems, scripture