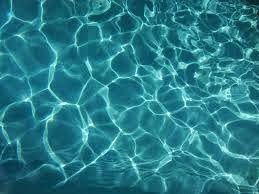 And humid.  Yes, very humid, like a sauna or a spa, although you'll want to get the very idea of any sort of luxury out of your head right. this. moment.

So, maybe not a spa or sauna, but something more like a tropical jungle.

Yes, that’s it – hot, humid and filled with danger.

You enter, four children in tow, through the germ-infested high school locker room.  Carrying a bag of towels and toys, your purse strapped across your chest, you herd your children down a long narrow hall, past the toilets, the showers, the lockers, until you emerge, like someone newly born, into the heavy, moist, echo-y cavern of the pool.

This is where you grab the hands of the littlest ones.  Reflexively, your mama-arms shoot out to catch the One Who Wanders like a lost lamb toward the pool’s edge and the Other Who Is Running and Might Slip.  Little limbs are pulled and stretched as you steer toward the metal bleachers, the five of you forming a bizarre amoeba of tired, sweaty, anxious people.

The older two, the “swimmers,” are nervous and clingy and the little ones are just plain clingy, unhappy with the Waiting, the Watching, the Lack of Swimming, they will do.

You are a model of patience, as one then another has to use the bathroom.  Hands are clasped again as you pass the Great Abyss of the pool's edge and shuffle again down the wet, tiled hallway.

It's never just One who has to pee, there's always Another and so rather than running in and out, you all unfold, unclasp and settle in to that small dirty space with the sink that stopped-up yesterday and stops-up still today.

You help the littlest one onto a toilet, but the fact that he's wearing his rain boots and you are in a hurry leads to what we'll call “a series of unfortunate events.”  Because he's wearing his rain boots you fail to pull his pants down far enough and because you fail to pull his pants down far enough you also fail to place him far enough back on the potty.  He is therefore perfectly positioned to pee directly over the edge of the potty and into his shorts (at which point I would also like to mention that no one is wearing underwear because you simply cannot find any underwear in the house, possibly due to a small-ish laundry “situation” which has crept up out of nowhere).

Seeing the pee heading for his shorts, you will use your lightening-quick maternal reflexes to throw his legs up into the air, hoping to aim the pee back into the potty but instead causing that incredible stream of urine (how long has it been since he last peed?!) to shoot out, under his shorts and onto the bathroom floor.  Your child is now peeing onto the bathroom floor, but you are determined to avoid wet shorts and a trip to the van for something to change into (do you even HAVE anything for him to change into??) and so you simply keep his legs in the air while the puddle grows.

Let’s just leave that puddle there, shall we?

Finally, someone, the oldest one is deposited with her class and you cart the other three up two flights of stairs to a second set of more removed bleachers.  Miraculously, no one falls down the Cement Stairwell of Certain Death and you are pleased to see only a small swath of pee soaked shorts on your two-year-old’s back-side as he marches up the stairs.

Today you brought apples, smart woman that you are.

This will keep them happy and occupied for sure and, yes, you do cast a none-too-obvious judgmental glance at the couple next to you who’s two-year-old is downing a snack-pack of Chips-Ahoy cookies.  Your gloating, however, is interrupted by the astounding bang your son's apple makes as it falls through the small opening at the bottom of the plexiglass railing, down to the pool level below where it bounces off the bleachers and rolls under a desk.

This is the same opening you eyed-up again and again on day one, trying to reason out whether a thirty-pound being could in any way possibly be in danger of slipping through it.  Although your maternal instincts argued heavily, your reason won out in determining that your children could not possibly slip through that opening.

The apple, however, proves to be another story altogether.

Nearly paralyzed with mortification, you watch as the man next to you (yes, the one doling out the Chips-Ahoy cookies that do. not. by the way, ROLL) catches the apple that’s tossed back up by an instructor below.

Your hot, tired, two-year olds cling and climb on you like the tendrils of a plant; if this is the jungle, they are the heavy, swinging vines.

Then, of course, a half-eaten apple is dropped right there on the ground in front of the other kind mothers and handing it to you, one says, “You’re going to want to wash that.”

“I have a wipe,” another offers.

But, swallowing your pride and unwilling to face another trip to the bathroom, you brush your hand quickly over the apple to offer the guise of Cleanliness.  Handing it back to your son, you offer up the only explanation you have, “I have four children.”

Then your son is back to crunching and "building his immune system," just. like. that.

You know, don’t you, that it isn't five minutes before Another One, with big puppy-dog eyes, HAS to go to the bathroom.  Desperate, you suggest, (quite lightly) the possibility that he goes by himself.  This suggestion is met with a look that accuses you of a deep maternal betrayal and you are certain, right then and there that if you do not load up the four of you and head to the bathroom Together, your son will be sharing this very moment with a counselor somewhere, someday.  As in, “My terrible, cold-hearted mother, (gasp!) would not stay with me while I pooped.”

Anxious to avoid abandonment issues, you do what any reasonable woman would do and push down your frustration while you all hike back down the Cement Stairwell of Certain Death, back past the Great Abyss, back through the narrow, wet hallway, being careful to avoid the Pee-Puddle-Stall.

The pooping commences and you wander, frustrated, between the bathroom and the locker room where your twins have discovered the fun of banging locker doors open and shut.

“We fit! We fit!” they exclaim which is adorable, of course, seeing them standing there so small and compact in the locker's tiny space.  But you are their Mother and this is the Jungle and you cannot be certain you know how to unlatch those doors, so you convince your two-year-olds that playing in the lockers isn't such a Good Idea and explain how the firemen will have to come and cut them out if they get stuck.

Finally the pooping is done and you make your way back upstairs again (you know the routine by now, long hallway, Great Abyss, Cement Stairway of Certain Death).

The first half hour of swim lessons has now passed and, drawing a line in the sand, you convince your six-year-old that he is able to walk down to his class alone - this is the first small victory of your morning.

But there's another half hour of swim lessons left to endure and despite the help of your daughter, it will be just as eventful as the first.

You make Two More trips to the bathroom with yet another child professing the desperate need to perform one and then another bodily function.  A toy escapes (by accident? on purpose?) through the opening in the plexiglass railing and when another young swim instructor tosses it up, you catch it with charming ease.  The other Moms are amazed at your good catch - this is yet another small victory.

You stand now at the railing watching your son who's first in the line of children wearing bright orange life jackets and waiting to jump into the deep end of the pool.  Before jumping he raises his index finger to make one point or another of clarification and then he leaps and you are grateful his teacher doesn't let his head go under.

He floats, face-up, across the pool and you smile down on him because your eyes, your smile, are like the sun to him and he smiles back seeing you watching him, but his hands never leave the life vest at his chest, because that's what he's been told to do.

One by one the children leap, like a long line of penguins slipping into the ocean and then they're all bobbing along, like so many brightly colored water bugs.

It nearly does you in, how small they look drifting in that big square of blue and for one moment in your mind that pool is the universe and you are that child bobbing along, unsure, obeying instructions and hoping against hope to feel (and soon) the familiar nudge of the pool against your head.

On their way back across the pool, paddling on their stomachs now, one small boy struggles, taking in gulp after gulp of water.  The mothers in the bleachers lean forward as one with a collective intake of air as the struggling boy flips over onto his back, waving his arms in the air and crying, at last, "Help, help!"

It's mere seconds before the teacher's there and the mothers all lean back and exhale as tears spring to your eyes.

This, you know, is why you've been relegated to the nose-bleed section - you who would leap without hesitation over that plexi-glass wall if need-be, you who have ushered your children safely up and down the Cement Stairwell of Death, you who have circumnavigated the Great Abyss with care and caution.

You, dear woman, you are their Life Jacket.

This has been your role for eight years or more and now they're learning to swim and, God-willing, someday you will be tossed aside as they dive, paddle and float through Life.
Finally it's time to go.

Your son comes shivering up to you with blood-shot eyes.

“I wish I could do today over,” he says and your heart sinks as you wonder what went wrong.

"Why?" you ask, ready for the flood-gates to open.

Then you are limp with relief as you again clasp hands with your little people and ferry your way down the hallway, across the parking lot and into the van.

It is nearly the weekend now, no more swim lessons for three whole days.  You will spend the weekend resting and recovering, wondering just how many calories you burned climbing up and down the stairs in that hellish sweat-lodge of stress.  You will eat those calories and more in chips as you sit on the couch with your husband, explaining the fear and the joy of watching them there, the great difficulty of holding on and letting go.

Come Monday you will all be back there again, learning how to swim.
Posted by kchripczuk
Email ThisBlogThis!Share to TwitterShare to FacebookShare to Pinterest
Labels: fear, grace, humor, kids, mothering, stress, summer, surrender, trust, twins, vulnerability