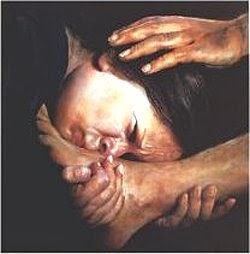 The following is a work of fiction based on the story of Jesus eating at Simon the Pharisee's house (Luke 7:36-50).  It's based on a sermon from awhile back and seemed somehow appropriate for Lent.

He tended to every detail.

Invitations were carefully considered and extended.  The best linens laid, the finest dishes set out.  The seating chart arranged and rearranged again, everything situated to present himself in the best light.

He prepared his questions ahead of time. Clever queries, not too controversial, aimed more at displaying his own mental agility than fleshing out the nuances of this new and controversial teacher.

Maybe the invitation was a moment of spontaneity he later grew to regret.
Perhaps there was a knot of nerves in his stomach as the meal approached, a cool sweat breaking out on his upper lip.

Jesus and his disciples arrived wearing the dust of the day and looking tired.  By now Jesus had a reputation as a “drunkard and a glutton.”

The Pharisee’s friends arrived, other teachers of the law, exchanging looks, eyebrows raised.  They were likely cordial, but distant.


Simon began to wonder if he'd made a mistake.  Everywhere he went, Jesus drew a crowd.
Strangers from the town gathered around the open courtyard, leaning, leering, murmuring among themselves.

Those gathered at the table found themselves separated by a thousand years of interpretation, a million nuances, a trillion tiny judgments that left the conversation stilted, nearly unbearable.


She was at the river, washing her thin clothes, watching as the dirt lifted layer by layer, carried away by the current.  She beat the cloth heavily with a stone in her effort to clean what could not be cleaned - the reputation that followed her like a shadow.

Far from where the other women gathered, she was free from their endless chatter, alone with her thoughts, her fears, her deep aching loneliness.

Over the wind, over the water, John the Baptist's wild voice rolled like the echo of distant thunder.

Like water, his words seeped in, bypassing her loneliness and cracking open a well of pain that she carried deep deep within.

Drawn closer, she watched as one person after another approached the water where John stood, waist deep.

“Repent!” he said, to each and then, splash, they sank under, supported only by his thick hands.

“Your sins are forgiven,” he proclaimed over every face as it broke the surface, dripping.

She didn’t ask how or why or by whose permission as she stepped forward into the water.  Her wet clothes clung indecently to a body gifted with curves that drew men’s eyes, even here, even now.

Stumbling on the uneven riverbed, she righted herself and her eyes met the wide, wild eyes of John.  His eyes held her there in a steady gaze.

She felt naked before his searching eyes, vulnerable as her shame fell around her, dropping like garments.

In a matter of seconds, she was turned by rough hands that held her gently and plunged into the dark, cold water.  The sound of the river pummeled her ears.  It was a whirl of chaos, then she too broke the water’s surface.


The light, the sounds, pierced her as she absorbed the word that was shouted over her, “Forgiven!”
She stumbled, weeping, toward the river’s edge and sat there stunned while people continued moving in and out of the water and the refrains repeated again and again, “Repent!” and “Your sins are forgiven!”

There was another word too, on the lips of everyone there, “Jesus,” a teacher, a prophet.  Jesus was the one, the driving force behind the man with the wild eyes.

Jesus was the one turning the world upside down, Jesus was the water washing it all clean, the light casting out shadows, the love piercing the shame.

Word spread through the village, there was to be a dinner, a tete-a-tete at Simon the Pharisee’s house and Jesus would be there.


She ran the whole way to her shambled home and tore through meager belongings until her fingers wrapped around the small jar she kept hidden, wrapped in a rag, her most precious possession.
By the time she reached the dinner, she was sweating, out of breath, her hair hanging down in tangles.


There was a scuffle on the outer edge of the crowd, some shouts and shoving as she burst into the courtyard.
Disheveled, she erupted into loud tears, overcome with emotion at the sight of Jesus.
Everything stopped.
Every eye turned.
Jaws dropped.
Every man at the table stiffened, drawing back, but Jesus' body softened visibly as she knelt.

Bending over his feet, her hands eased along the arches, the callouses smoothing hot tears over dry, dusty skin.
The weariness in Jesus' eyes, his shoulders, softened as he opened himself to the love that welled up out of her eyes, her hands, her sweaty, bent back.
Jesus, love-hungry and worn, welcomed her touch and what was a holy moment for Jesus and the woman - a sacrament - was a blasphemy for the Pharisee.
The sound of alabaster shattering ricocheted off the walls.
The scent of perfume wafting woke Simon like smelling salts.
His eyes narrowed as he pulled himself back, half-rising from the table.  His lips curled into a sneer as what sounded like a low growl rumbled forth.

Jesus, sensing the shift, half-turned and spoke the name, low and stern, like a master calling off a dog, "Simon . . ." and then, pausing, he added, "I have something to say to you."

"Simon."  It was the name that drew him up short, giving him pause enough to listen.

Simon, the name his parents gave him all those years ago, the name he no longer used, preferring, instead, the shelter of religious titles.  The name stripped him to his essence and he replied as though a school boy to his master, "Yes, teacher, speak."

The woman’s gratitude becomes a table, a meal where she and Christ are fed.

Simon’s judgment becomes a wall isolating him from this meal of grace.

Oh, God, may we also be moved through repentance and forgiveness to the seat of gratitude, at your feet.  Never let us miss this meal of grace.  Amen.