When my husband and I were first married we had a microwave that we kept in a cupboard in our kitchen.  It was a hefty old thing, brown and beige, with a large brown knob you turned to set the time.  It must have a weighed a good twenty pounds and was a big as a medium sized TV.  We kept it in the cupboard under the place on the counter where we used it and whoever pulled it out and plugged it in was responsible also for putting it back away.

Once in awhile one of us would ask the other, "Who left the microwave out?"

At that same apartment that we had a cat who played happily with rubberbands before carrying them off and depositing them ceremoniously into the toilet.  String too, she loved, and grabbing a strand of my crocheting, she would run off to the bathroom, unwinding things as she went, dragging out a good twenty feet of yarn before she reached her destination.  Following the trail through the house we would find the end dangling, dripping, over the toilet seat.

Once, when we accidentally left some Thanksgiving leftovers on the counter over night, the cat came along and found the zip-lock bag full of Turkey.  She must have played with and chewed on the bag for a good while before tossing it too into the toilet, where we found it floating the following morning.

The biggest problem with that cat, though, was that she loved to pee on the carpet and in the shower.  I wish she would've put that too in the toilet.

Later, a good ten years into our marriage, when we finally acquired a TV, we kept it in the attic and took it out on weekends or evenings for watching movies.  Back then we would watch two movies back-to-back before lugging the thing back upstairs to the attic crawl space.  Lugging it awkwardly up and down the stairs, my husband dropped it one time, breaking a large plastic piece off of the corner, but it still worked.

We thought that by making TV inconvenient we would watch less, turns out we were just inconvenienced more often.

Where we now live, we have three refrigerators.  One is ours that we brought from the house we sold and the second is actually an upright deep freezer that we couldn't get to fit down the basement stairs.  The third is the fridge that came with the apartment.  All three stand clustered together in the kitchen.

We kept the one unplugged and since our apartment lacks storage, I started storing things in the freezer - mostly paper goods and 2 lb cans of coffee.

Since then, my husband brewed beer and plugged in the third refrigerator for storing his kegerator.

So now our napkins and plates are nicely chilled. 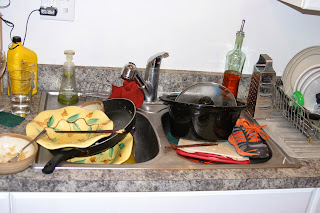 This morning the twins played quietly upstairs for quite awhile while I cooked up chicken and sausage to store in the freezer. Their quiet made me nervously grateful and finally I decided it was time to check-in on what they were doing.  This is what I found: 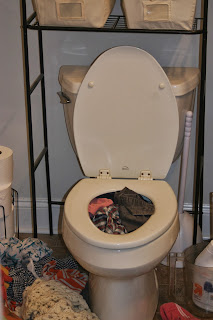 They took the pile of laundry from the bathroom floor and stuffed it all into the toilet adding, also, the blankets from Levi's crib.

String and rubberbands in the toilet.

A TV in the attic.

Paper plates in the freezer.

A shoe in the sink.

Laundry in the toilet.

Posted by kchripczuk at 5:44 PM
Email ThisBlogThis!Share to TwitterShare to FacebookShare to Pinterest
Labels: humor, life