The Kissing Hand (Kindergarten and the Scent of God) 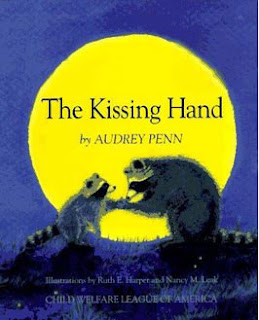 It was the first day of kindergarten.  My oldest son and I walked toward the low brick building holding hands and he reached over with his right hand to pull on my wrist, pressing his small hand deeper into the crevasse between my thumb and index finger. Pressing, pulling, he buried his hand in mine as I asked, “What are you doing?”


“It feels like it’s slipping out,” he explained.
Then I held on tighter, adding, “Don’t worry, I’m not going to let it go.”


Inside, he sat on a large alphabet rug with his classmates, his long legs folded under as his teacher read Audrey Penn's, The Kissing Hand. I sat at his desk in a tiny chair that pushed my knees to my chin and braced myself against tears as I listened to the story of a Mama Raccoon and her son parting for school.
The story is based on a scene the author witnessed, where a mother raccoon placed its nose on its baby’s paw and the baby pressed the paw to its own face, as a way of remembering its mother’s scent. In Penn’sbook, the mother raccoon kisses her son’s paw, telling him,

. . . whenever you feel lonely, and need a little loving from home, just
press your hand to your cheek and think, 'Mommy loves you, Mommy
loves you.'  And that very kiss will jump to your face and fill you with
toasty warm thoughts.

Later, the young raccoon, Chester, repeats the ritual for his mother,

"Give me your hand," he told her.  Chester took his mother's hand into
his own and unfolded her large, familiar fingers into a fan.  Next he
leaned forward and kissed the center of her hand.  "Now you have a
kissing hand too," he told her.


We moved to another part of the room and I crouched beside my son who sat now in a chair just his size in front of a large piece of paper. He sponged cool green tempera paint onto my outstretched hand and I pressed it firm onto the page. Then I coated his with yellow and he too pressed his hand down, leaving an imprint on each side of the page; one large hand with long green fingers and a smaller one, yellow as the sun.
Sitting in that room that felt so empty and far from home, I wondered how God’s love would be made present there.  Then I realized it would be, in part, through my son, who carries the love of God that his father and I have massaged into his limbs, his bones, his heart; that he is the scent of God’s presence to his classmates and that I am the scent of God’s presence to him.
And I thought of the One who the prophet Isaiah says, has engraved us on the palms of his hands.
God who, like a mother, carries his children with him breathing deep the scent of his people even as he whispers, “I love you. I love you. I love you.”
*   *   *﻿
Click on the video below to listen to Audrey Penn reading The Kissing Hand.
(This post is linked with Playdates With God).
Posted by kchripczuk
Email ThisBlogThis!Share to TwitterShare to FacebookShare to Pinterest
Labels: God, kids, love, mothering, transition, with