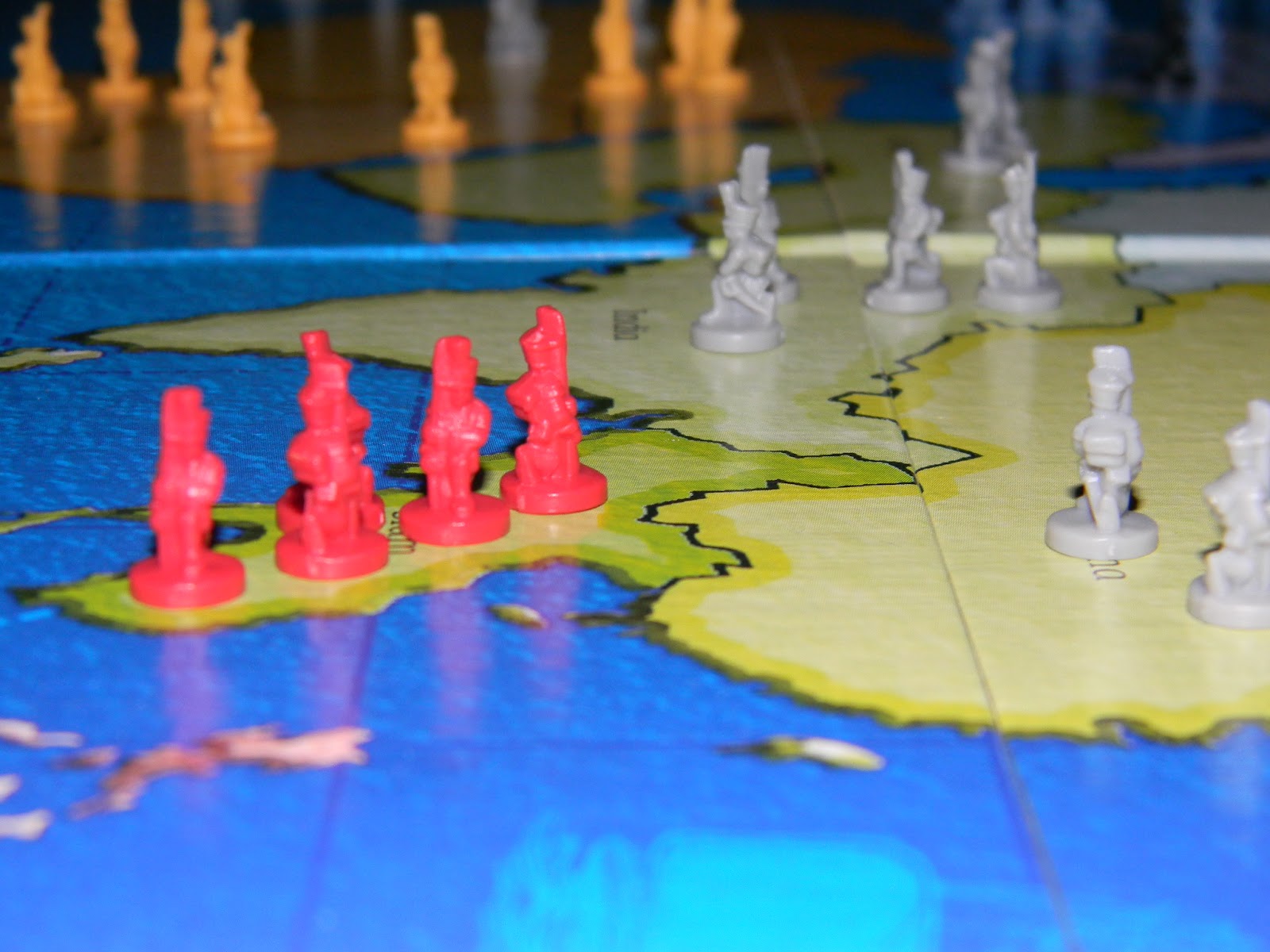 Early in our marriage it became clear that too many one-on-one game nights would ruin us, since I'm terribly competitive and an incredibly poor sport.  Being poor newlyweds, we didn’t own a TV and couldn’t afford to go to the movies, so we decided to keep playing our games with one crucial change – we would play on a team together against any number of other friends who were also played by, well, us.


Though we still skewed the score from time to time to make sure we came out winners, we enjoyed ourselves and my poor sportsmanship was kept under wraps until the fatal day that we stumbled across Risk: The Game of Global Domination.
Risk is a game of dice, slim on strategy and high on chance. With every roll of the dice fortunes turn from certain triumph to definite defeat and few are the relationships that survive it.  During one particularly intense game I shoved the playing board hard enough to make it slide across the dining room table.  Strategically arranged soldiers, tanks and cavalry men scattered wildly over various continents and oceans.  I was losing badly and my husband was gloating and it was more than I could bear.
After the “incident” we banned Risk from our household, selling it to an unsuspecting customer at a yard sale.  We stuck to Trivial Pursuit, preferring the absurdity of teaming up together against ourselves over potential relational disaster.


*   *   *   *
Fast forward a good ten years and here we are in the midst of selling our house and the process feels surprisingly similar to the game of Risk - on any given day we vacillate between dreamy elation and devastated despair as we circle frenetically around to-do lists and strategies, Internet searches and realtor listings.


“This is crazy,” we say, looking past each other with wild, dilated eyes before turning back to scroll with obsession through the same listings we’ve seen for the past month or more.
“Are we crazy?” we ask, standing cornered in the kitchen planning, weighing our next move, rolling imaginary dice as we add up the possible weeks it will take to list, sell and buy a new home.


When it comes right down to it, there’s risk involved in selling one house to buy another and I, the poor competitive sport that I am, find myself torn between ratcheting up my efforts to control the uncontrollable (and making my family crazy in the process) or resigning to devastation (and making my family crazy in the process).  Too often, I find myself picking fights with my husband in subtle ways, as though our house is the playing board and my fingers run lightly along the edge, poised to shove it all into disarray if only to relieve the tension of enduring the unknown.
*   *   *   *

Occasionally, in a rare moment of grace, we see each other in the middle of it all and our arms open as if by instinct.  “We're crazy,” we say, leaning in and shifting our weight just the slightest but changing our posture radically, from against to together.