Deer Paths and the Distance Between Body and Soul 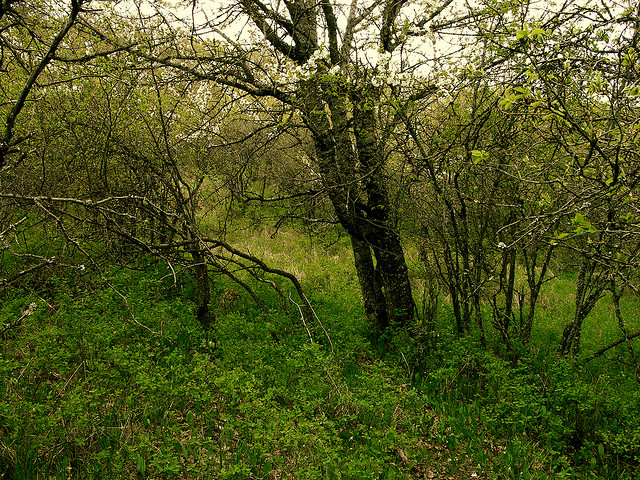 My participation in Oasis’ Journey into Silence began with two days and nights of prayer, silence and solitude spent journaling, wandering and re-collecting myself.  Then I returned home to the ocean of intensity, chaos and noise that typifies life with four young children.


I jumped in at the deep end and came up paddling hard like an Olympic swimmer.  My husband I stayed afloat by working side by side or in shifts as the weeks and days rolled over us like crashing waves.  There were bouts of strep-throat for the older two, a sinus infection for another and, later a sinus infection for me.  Bone-rattling coughs shook the house and breathing treatments were doled out morning, noon and night.  There was a camping trip, preaching, writing and field trips and my husband finally had his wisdom teeth removed.


My bags sat unpacked, my notebooks unopened and when the time came for the following months’ retreat I felt unprepared and guilty for having gotten so wrapped up in the demands of day-to-day life.  I’d read only a few chapters of the assigned book, my papers were out of order, scattered, and I’d missed one assigned reading altogether.


I ran through the house the morning of looking for books and scanning the few chapters I had read hoping to have something to add to the discussion.  I riffled through the jumble of clothes in my dresser looking for anything clean enough to wear that might also help me feel like I was anything more than the disheveled, exhausted mother I felt myself to be.


As I settled into the stillness and quiet that morning, I wondered what on earth I was doing there, how I could seek and find silence in a life stage that seemed so far removed from the contemplative.  As I wondered the following true story was shared . . .


There once were two neighbors who owned two plots of land that converged in the woods that spread across their two properties without concern for boundary lines.  Both men loved their land, but they loved it in different ways.


The one, I’ll call him the man who prayed, had a vision for his land to become a place for people to gather and be fed spiritually.  He built a small retreat center made of re-purposed lumber and found objects and he filled the woods around it with wandering trails for contemplation that led slowly, gradually down to the waters’ edge; the water that, like the woods, flowed past both properties, paying no heed to the surveyor’s red flags.


The other man, I’ll call him the man who hunted, also loved his land, but had a different vision for it.  It would be a place for family to gather, children and grandchildren hunting, fishing, and playing together.  So he slowly and carefully built his way toward his vision too which also included paths that wound their way through the woods.


Then one day the man who prayed had the idea that they might join together the trails that crisscrossed the two properties.  He approached the man who hunted and made his proposal and though the exchange was friendly, there was no reply and the issue lay unresolved for quite some time.  He assumed the answer was no and time flowed on like the water in the creek and the changing of seasons.


Then, one day, the man who prayed was out in his yard, down by the water’s edge, when he heard his neighbor calling out to him through the woods.  “Yes?” he replied.


“Well, our paths are joined,” the neighbor said.  Then, after a pause, he added, “The deer did it for us.”


Later in the morning we were asked to share what we were leaving behind in order to attend the day’s retreat.  When my turn came I blurted, almost without thinking, “Incessant work.” Then the tears came and my voice choked as I added, “I’m so exhausted.”  It came out like a confession or, perhaps, a repentance and the silence of the room, the eyes that watched and witnessed, the ears that heard the break in my voice, all of these absorbed and stood with me silently in my relinquishment.


Then came a time of prayer and as I sat with my eyes closed it came to me all at once, a memory from earlier in the week when I’d stood in our dinning room that glowed with the waning afternoon sun.  I froze in mid-motion, between cleaning and carrying and cutting bits of food for the twins, fetching drinks and silverware and refills for everyone.  Having reached my limit I stopped and turned toward my husband, my hands and my voice automatically raised for emphasis as I proclaimed, “Just once, I would like to have a meal where I’m not getting up and down ten times.  Do you know how long it’s been since I had that?!”


I sat in the stillness of the retreat and tears began to run down my cheeks as I remembered that in just a few short, quiet hours I would be eating a meal that was prepared for us, for me, by the owner of the retreat center.  I would sit in silence looking out over the water, watching the falling leaves, tasting my food and rising only when I was ready.  I hadn’t known that my outburst in the kitchen was a prayer, but here it was, already, answered.


Oh my, did I relish that lunch (which I also wrote about HERE).  We ate in a lovely windowed porch area overlooking the sunlit stream, watching as leaves fell from the trees, then continued their journey on the surface of the water.  I savored it all - the salad coated in a creamy peanut butter dressing and topped with crunchy nuts, the perfectly creamy squash soup that warmed my bowl and hands and body inside and out, and the apple pear cobbler topped with a crunchy topping and whipped cream.  And when I saw the slices of bread already buttered, I wanted to cry, to get down on my knees and say, “Thank you, thank you, thank you.”


*   *   *   *
﻿
What am I trying to say here?  I’m almost not sure myself, except that I’d slipped back into believing the old, old myth that life in the world has nothing to do with the life of the spirit.  It was as though I’d begun to believe that the body and spirit are two parcels of land that sit side-by-side, but whose paths never meet.


But the meal, the silence, and the beauty of the woods in the dying-off of fall reminded me that the life of the spirit IS the life of the body, the two are one and the same and for this we might all fall to our knees saying, “Thank you, thank you, thank you.”  For we are bodily beings and we live in a world filled with physical demands on our time and space and energy and if we have no hope of finding God there, in the midst of our working, breathing, laying down to sleep lives, then we have so little hope.


The life of the body and the life of the spirit may indeed be two plots of land that lay side-by-side and goodness knows they get out of balance from time to time, but the truth is they are connected.  The grace that surprised me so on that morning was the way that God wove the two together into one for me without my even knowing it, like the deer wove those two trails together, like the woods that grew unhindered between the two properties, like the creek that nourished the roots of both without distinction.
If you liked this post, you may also like They Are Eating My Prayers.
Posted by kchripczuk
Email ThisBlogThis!Share to TwitterShare to FacebookShare to Pinterest
Labels: contemplation, dayliness, grace, gratitude, nature, Oasis Ministries, rest