Joseph's Dream (The Surrender to a Life Larger and More Beautiful)

This year I've found myself drawn to the character of Joseph in the stories of the nativity.  Mostly I find myself wondering about him - what kind of person was he to be able to surrender to a life so far beyond his control and desire?  to allow the inklings and images of a strange dream to shape his future?  As I wondered I started writing which led to this little bit of fiction.  Enjoy!  and May your Christmas be blessed!
*   *   *   *   *
There was no way to get comfortable, just as there was no way to quiet his racing mind.  Laying on the thin sleeping mat it felt as though his thoughts mirrored his body, restless, twisting, turning and seeking resolution.  He rose a time or two, paced, knelt, and rose to pace again.  He wandered out at one point into the dark night, the cool air, and paused to look up at the wide sky, the brightly hanging stars.  Rather than feeling relief, though, he was overwhelmed by his own smallness so that the wideness of the sky left him feeling more lost and fearful than he had since he was a small boy.  The enormity was disorienting, frightening and he quickly turned back inside and lay down with something like resolve.
Still, sleep didn’t come.


Most of what he knew about life he’d learned from working with wood and it was no surprise that his distracted mind, even now, kept returning to his workshop.  He’d learned, over time, to read the wood and find there the answer to his questions, not in the way of the sooth-sayers, seers and magicians who lined the market square, but in the same way that every skilled craftsman knows that all things material speak also of the eternal if one is able, willing, to listen.
So it was that his mind worked on the problem, the conversation, going over it again and again as though sanding, seeking beneath the surface some deeper meaning, some guiding revelation.  He’d turned and walked out when she told him, the largeness of her revelation, of what she was asking, striking him like the wideness of the night sky so that he felt suddenly small and foolish, lost.  His leaving was automatic, rising from the primal urge to flee in the face of pain.

He was grateful now that he hadn’t struck out in anger or rage as he might have in his youth.  Grateful that life had taught some level of restraint.

He’d always been a dreamer, an idealist of sorts and in his youth the use of force and power were reflexive as a means to an end.  Believing in the righteousness of his ends, his ideals, he’d been known as a hothead, a firebrand, a short fuse that was quick to light and long-burning.  His religion, his righteousness, and the accompanying anger had given him a sense of identity, a sense of arrival and of having a place to stand in the world which, at the time, he took to mean that he was at long last a man.

It was hard to say exactly what had changed him over the years other than the usual series of failings and fallings and losses.  The wood too, had worked on him even as he worked on it.  Wood doesn’t respond well to power and anger.  It had enraged him at times working beside his own quiet father; the way he couldn’t make the wood do what he wanted it to, couldn’t make it bend to his willing, but instead had to surrender himself to its lead.  It was the wood that caught him up short time and time again, caught him in his fire and force.

It took years of projects that splintered and split apart at the last minute, of bent nails and wood that turned on him to accept that he was not in charge.  When he worked in a shop of his own he would occasionally give in to frustration and rage, throwing a project with defiance.  There was a humility required in the craft that stood at odds with everything he believed about the world and what it meant to be a man in it.


But that was a long time ago and now he felt himself changed, smoothed, worn-down, as though he were the piece of wood and life was itself the skilled hand of the carpenter.  Life had sized him up, stripped the bark and rough edges away until he found himself exposed and yielded like wood in skilled hands.
Life had whittled away at him until what was left was something less, but purer and he’d fallen into a habit of waiting to see what use there might be for one so diminished.


The arrangement, the engagement, had seemed too good to be true, unexpected, but fool that he was, it brought a spark of hope.  The girl wasn’t pretty, but sturdy and young.  To his eye she seemed like a tree, a rough exterior hiding something truer within; she had a depth and presence like all trees do and he found himself drawn to her.  He’d approached the engagement like he approached most pursuits these days, slowly, watchfully, and maybe that was why her words shocked him so, stung him in a deep place.
Now he lay wrestling unwilling to accept one more submission, one more surrender to a life larger and more painful than he’d bargained on.


At some point he found himself dwelling in the thin space between sleeping and wakefulness and this was when the dream came.  In the dream he was working in his shop, fitfully sorting through piles of discarded wood, looking for something he couldn’t name.  There were layers of dust and wood shavings everywhere that rose up like small clouds and flew like sparks as he frantically lifted and moved the lumber.
Then he found himself in a shaded wood.  Sunlight glinted down through the uppermost branches of tall trees, but the ground where he stood was dark and cold.  Here too he was hunting, searching for something.  His axe hung from his calloused right hand as he plowed through the woods that seemed to go on forever.  He felt a deepening anxiety as he pressed forward, stumbling over the roots of ancient trees; the feeling that he was forgetting something important mingled with the feeling that some dark shadow was following him.


He was running, crashing through the woods given over almost completely to panic when he saw a glimmer of light in the distance.  The light calmed him enough that he stilled, turned and, as it happens in dreams, found himself standing inexplicably in a brightly lit clearing.  A stream ran through it, chattering along happily and beside it stood a young tree, its leaves green and shimmering.
Something about the tree and the happy brook and the way it contrasted with his fear and anxiety sparked a deep rage inside of him.  Feeling the axe in his hand he turned and wielded it with all the strength of his youth.  He fell the tree in a few quick fierce blows and let the head of the axe fall to the ground, leaning over it drawing in deep shaking breaths.


Then, looking up, he saw a small shoot growing up out of the stump as if in defiance to his destruction.  It grew and sprouted branches, leaves, before his very eyes.  It was as though the tree he’d cut down contained within it the seed, the root of an even greater tree.   This, too, sparked rage in him and he leaned back, straightening, and lifted his ax into the air bent on destroying the stump and the shoot with it.
It was then that he felt the hand, hot and heavy like fire on the back of his arm, then that he felt the Presence of one standing, hovering behind him.   The touch stopped him, mid-swing and the fullness of time fell open around him.  It was as though the angel’s touch released a damn of sorrow and fear that had been building and the intensity of it all bent his knees and brought him broken, weeping to the ground.


There was no way to say how long this lasted; it was an eternity and a moment at once.  As he felt the fire on his arm, he felt his own fear and foolishness as he had when confronted with the night sky and when the girl had told him her story.  Then the words came like a force that pulsed through him entering not just through his ears, but through his whole being, “Do not be afraid.”
Those words washed over him like a wave so that his fears were lifted and following, like a second wave, he heard his own name, ”Joseph, son of David.”  At the sound of his name, he felt himself returned, no longer wandering or lost, but solid, present like one who’s returned home after a long and harrowing journey.


As he knelt, rooted beside the stream, he felt the angel lift his chin, the touch now cool and refreshing, like water from a spring.  His chin was lifted and his eyes looked to where the tree had been and there he now saw the girl, Mary.  She looked straight at him and in that gaze he felt himself being aligned with her, felt the love rising in his gut, felt for once that he knew where he was, who he was and that everything from then onward would arise out of that knowing.
In her eyes also he saw the light of the child that would come, like a glimmer of light without shadow, a small spark that would grow.  As he looked, the angel whispered in his ear one last word, “Jesus.”   And at the sound of the name, the spark leaped in Mary’s eyes and Joseph’s heart leapt within him.


In the morning it would seem that after the dream he’d fallen into a deep, heavy sleep,.  It was the kind of restful, peaceful sleep he would never experience again.  For though the dream located him, changing forever the map of his life, the days and years ahead were still filled with restless, shifting nights.  Nights of worry,and foreboding, nights of fleeing and the hovering fear that he would prove at long last to be nothing more than a fool.  In this way his life was sanded down, bent in ways beyond his choosing and he learned to stop wondering what it would become and lean into what was.
During those restless nights the dream was a star that guided him and he clung to it fiercely, that and the shepherds' visit, the star that hung low and heavy over the birthing place, and the visit of three dark strangers who mumbled in a foreign tongue, fussing over the child.  All of these became points of light in the darkness so that now when he lay restless, wrestling on his mat and rose, stepping out into the wide, dark expanse of the night, he felt not small and fearful, but rooted, as one following a scattered trail of stars toward home. 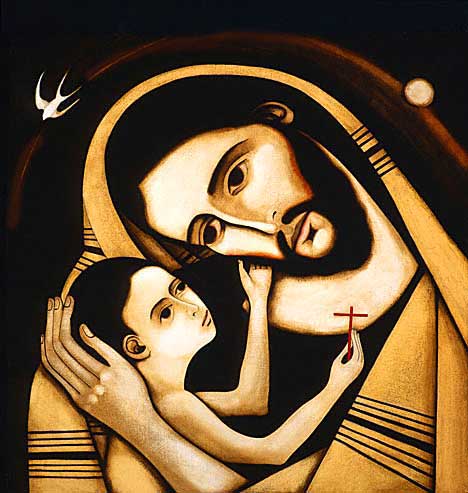