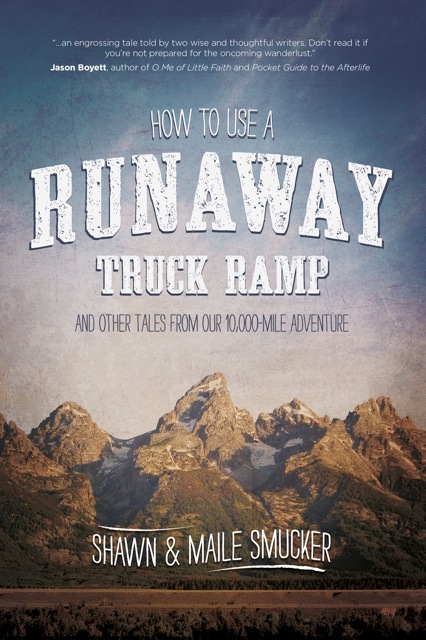 I was only a few weeks in to blogging when I stumbled across Shawn Smucker's blog via a friend's site.  His was one of the first blogs I ever followed, probably the first I commented on, and I continue to look forward to his posts each day.  Shawn's newest book, How to Use a Runaway Truck Ramp, came out this week and is available in multiple formats on Amazon and at Shawn's website, shawnsmucker.com.

The book follows Shawn and his family of six on a four month cross-country adventure.  Having dreamed of traveling the country in an RV "someday" Shawn and his wife Maile move their plans up by a few decades as they find themselves faced with a failing business and a simultaneous call to move into writing as a full time career.
Maile is also a writer and blogger and both contribute to the book that's both funny and reflective.  Shawn and Maile capture the excitement and anxiety of adventure while continuously giving glimpses into the deeper workings of God and grace in their lives.
I'm please to share an excerpt from the book below and encourage you to check it out on Amazon or click over to Shawn's blog to find more reading.  This excerpt is a little more serious than much of the book, but is a prime example of the depth of insight with which Shawn and Maile explore life.
*   *   *   *   *﻿
One night I called my mom. Within a few seconds of hearing her voice on the other end of the line, I knew something was wrong.
“Shawn, I have some not-so-good news,” she said in a quivery voice reserved for funerals and personal catastrophes.
“What’s wrong?” I asked.
“Your aunt has cancer,” she said.
It’s rather shocking, actually, to discover something like this. It felt like discovering there was a traitor in our midst. I found myself wondering which nearly invisible cells in my own body were planning a revolt. Which tree was going to fall on our bus. I started seeing death behind every oncoming car, or hiding in every shadow.
Then a few weeks later I found out that some very close friends of ours were miscarrying their baby. I didn’t know the details. But the sadness was recognizable and reminded me of standing next to Maile at a routine doctor’s visit when she was pregnant with our third child. The doctor looked up at us with pursed lips and confused eyebrows.
“I’m really sorry to tell you this,” she had said. “But something isn’t right.”  A few weeks later, Maile miscarried. Friends hugged us. We walked around our house quiet and empty.
There is something devastating about hope unattained. The unexpected diagnosis. The bright candle that turns into a smoldering wick. The “something isn’t right” speech. Sometimes, just sometimes, it makes me wonder if hope is worth it. Makes me want to live a life where I always expect the worst, keep my hands closed, my eyes on the ground in front of me. Too much looking out at horizons exposes one to the possibility of disappointment.
Then on a Tuesday evening during our time in Nashville, I went outside to help Maile’s brother till his garden. He and I took turns pushing the rototiller around, pushing all the old dead grass and hay under the rich brown soil. Then I raked out the dead stuff to the edges and piled it all into the wheelbarrow. The soil went from looking barren and rather unwilling to expectant. Open.
It takes a lot of turning over to reach that point. A lot of pounding and tearing and grinding of the soil. The rototiller grasped at the ground like giant claws. Our shovels bit into the ground and formed the edge of the garden.
As I worked the soil and the sun dropped behind those Tennessee hills, I thought of my aunt with cancer. My friends losing their baby. They were being tilled. They were being churned up.
But I know them, and I know their hearts. And while it will not diminish the pain they feel now, I marvel at what rich soil they will become.


*   *   *   *   *﻿
Shawn Smucker is the author of How to Use a Runaway Truck Ramp and Building a Life Out of Words. He lives in Lancaster County, PA with his wife Maile and their four children. You can find him on Twitter and Facebook, and he blogs (almost) daily at http://shawnsmucker.com/  Maile blogs at mailesmucker.blogspot.com.
Posted by kchripczuk
Email ThisBlogThis!Share to TwitterShare to FacebookShare to Pinterest
Labels: book review, darkness, hope, redemption, transformation