Dostoevsky 's Cook (An Angel, an Onion, and a Pair of Boots) 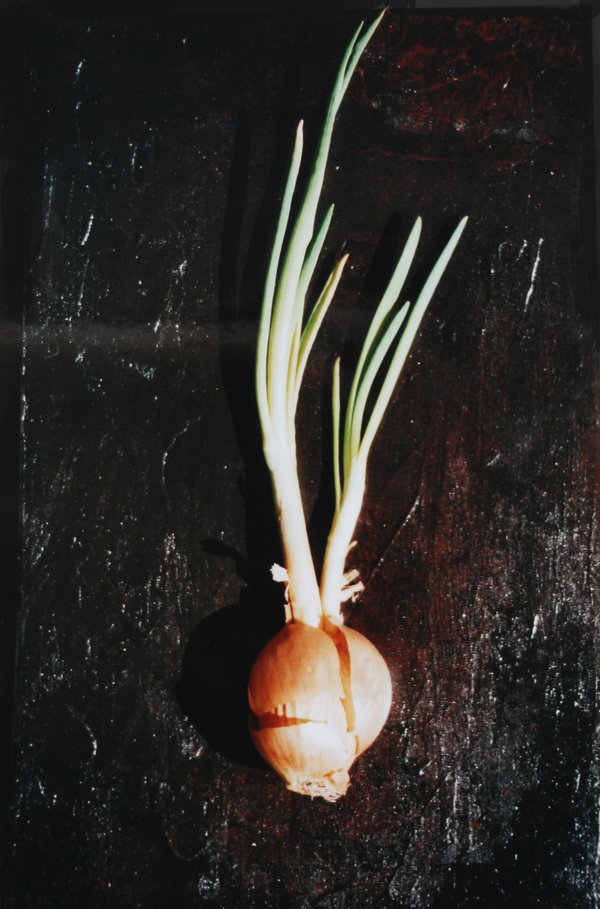 It's only a story, but it's a nice story.  I used to hear it when I was a child from Matryona, my cook, who is still with me.  It's like this.  Once upon a time there was a peasant woman and a very wicked woman she was.  And she died and did not leave a single good deed behind.  The devils caught her and plunged her into the lake of fire.  So her guardian angel stood and wondered what good deed of hers he could remember to tell God; "She once pulled up an onion in her garden," said he, "And gave it to a beggar woman." And God answered, "You take that onion then, hold it out to her in the lake, and let her take hold and be pulled out.  And if you can pull her out of the lake, let her come to Paradise, but if the onion breaks, then the woman must stay where she is."  The angel ran to the woman and held out the onion to her.  "Come," said he, "catch hold and I'll pull you out."  And he began cautiously pulling her out.  He had just pulled her right out, when the other sinners in the lake, seeing how she was being drawn out, began catching hold of her so as to be pulled out with her.  But she was a very wicked woman and she began kicking them.  "I'm to be pulled out, not you.  It's my onion, not yours."  As soon as she said that, the onion broke.  And the woman fell into the lake and she is burning there to this day.  So the angel wept and went away.  - Fyodor Dostoevsky

There was a time about eight months after the twins were born that I felt like I really needed (ie. wanted) a pair of rain boots.  I scoured the internet for weeks on end, I watched e-bay like a hawk and finally I bought a beautiful pair of lime green boots - they're the happiest boots I've ever seen.

When they arrived my children swarmed the door as they do any time the UPS man approaches.  I grabbed the box, declared it MINE and quickly set it aside to open later. When I finally opened them I was greeted by their heavy rubbery smell and marveled at their beauty as my children stood by, their eyes glowing with excitement and anticipation.  I looked the boots over and set them aside.

My children gasped in astonishment, "You're not going to wear them!?"  They immediately clamored around my precious new boots and began man-handling them in a wide variety of ways.

In that moment something rose up in me and I blurted out, "No, these are MY boots.  You MAY NOT touch them."  My children looked heartbroken, confused, as I gathered those boots and hauled them off to my room where they stood in line like soldiers awaiting the call of duty, waiting until I was good and ready to enjoy them.

It's strange, I know, but I rather like Dostoevsky's onion story.  I like the way it captures the impulse of human greed in such a recognizable way, how cleverly and simply it reveals the way that greed hurts not only the greedy, but all involved.

I love this story in the same way I love the story of Jonah for it too is a story of greed and jealousy to the point of hatred and Jonah too is willing to die rather than let go of his righteous anger.  These stories catch me and I glimpse myself in them as one does in walking by a mirror or store window; in a flash something is revealed in me that I know to be true but am not often willing to recognize.

I value this story for the way it catches me unawares and raises questions about my possessiveness, the way I protect me and mine and the cost of the things I keep.  No one could truly be as "wicked" as the woman was said to be, but that impulse is something we all know.

I'm a giving person, as a mother of four one could argue that I give of myself all day every day and it's good and right that a few things should be saved for just me alone.  I would say you're probably right on most accounts, but the next time my husband reaches over into my bowl of chips and I slap his hand away with a snappy, "Get your own bowl," maybe I'll remember this woman and her onion.

When the words "It's mine, not yours," rise so easily, so reflexively, and in such contrast to the mercy and joy and grace of the moment, I want to notice them, to sit awhile and consider their source, to notice the cost they bring to bear on my own soul and the souls of those around me.

Help me to remember, God, with grace, the cost of MINE.  Help me to discern what to hold tightly lest I be held, imprisoned by that which I hold.


*   *   *   *   *
﻿
I read this story last month in preparation for a retreat on Giving and Receiving.  It stayed with me, captured me, and rolled me around in its images and irony, its extremes and it's still not finished with me yet.  So here I am, sharing it with you.  What do you think?