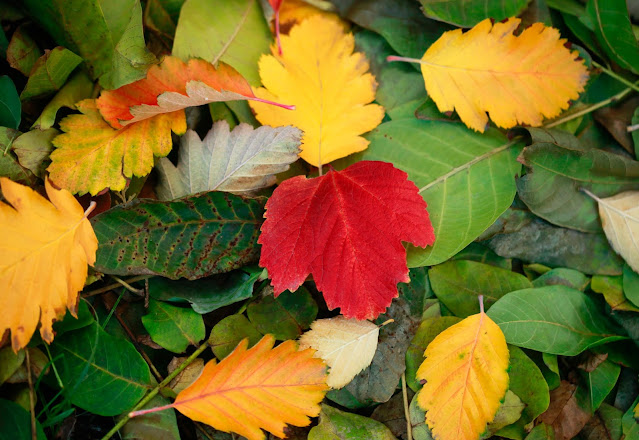 With the advent of October, many of us find ourselves shifting gears toward the last quarter of the year. We may be taking note of what has or has not been accomplished so far. We may be taking a clear-eyed look at what can reasonably be attained in the traditionally-busy months ahead. We may be wondering how to lighten the load, that we might travel with ease and clarity.

I want to offer you a FREE downloadable coloring/journal page that invites reflection on the question: What am I invited to let go of in this season?

Simply visit the link here to download or print the document. (Note: Your printer may say the margins are outside of the printable area. No worries, just click "ok" and go ahead and print as-is.)

I hope you enjoy this contemplative prompt and, if you find you'd like to discuss your experience, please reach out to schedule a time to talk: Chripczuk.kelly@gmail.com .

On Love and Willpower 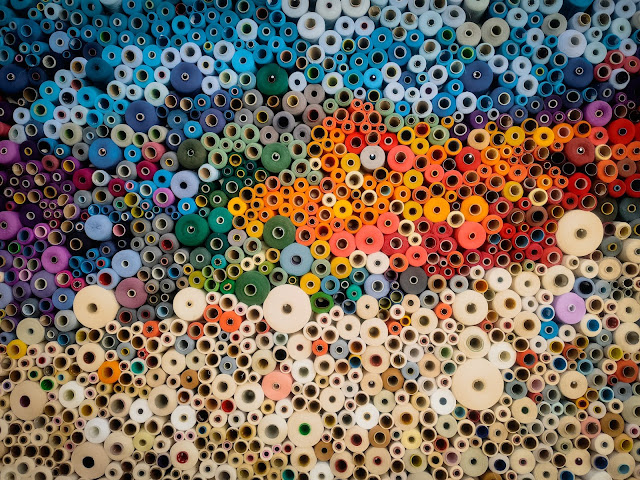 "Only love is capable of genuine transformation. Willpower is inadequate. Even spiritual effort is not up to the task. If we are to become great lovers, we must return again and again to the great love of the Great Lover." - David Benner in Sacred Companions
Be still, and let God love you.
With love,
Kelly
Posted by kchripczuk No comments:
Email ThisBlogThis!Share to TwitterShare to FacebookShare to Pinterest
Labels: love

On Seeking and Finding Contemplative Experience 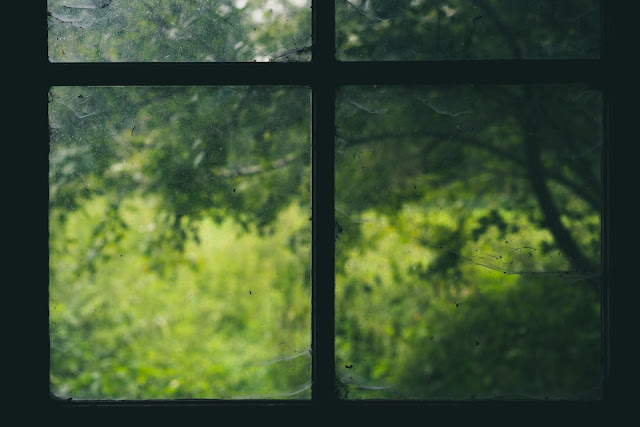 I write for a local ministry's newsletter once a month. For awhile now, I've looked back through old writing and offered that for their publication, but this month I wanted to share something new. Problem was, I didn't have any "fresh" contemplative experience to speak of (it's a contemplative newsletter) and I realized you can't force contemplative experience, you can only make yourself available. Sometimes, even that feels like it's asking too much.

In the end, I ended up sending this poem I wrote the other day. It seems that one key to contemplative awareness is the willingness to show up where we are, as we are.

Some mornings, it’s easier
to fill the bird feeder
than to fill my soul.

I’d rather trim
the rose bushes
than prune
my heart of its
unnecessary
attachments.

So, I do.
And when
I’m done,
the window
in front of my desk
is brighter,
more open,
and my heart
holds hope

yesterday’s
cardinal will return
and I will
watch him
as he watches
me.

Question to carry: What task, right in front of you, can you make yourself available to today? Is it possible you might find meaning and presence there?

Posted by kchripczuk No comments:
Email ThisBlogThis!Share to TwitterShare to FacebookShare to Pinterest

For When There Is Fear 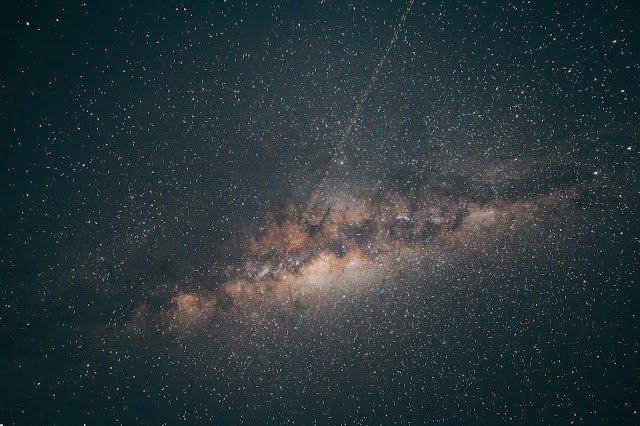 "I will always have fear, but I need not be my fears, for I have other places within myself from which to speak and act." - Parker Palmer
"More than anything, fear blinds..." - Mark Nepo
To be a person
of faith, is to consent
to life lived blind as a bat,
to be a people of light
walking in darkness.
Faith will teach you
what you need to know
about soaring at night,
listening for the echo
of your own prayers
reverberating back to you.
The way forward is revealed,
always, in relation to the
place where you are.
- K. Chripczuk
I have felt a heaviness of fear lately. Fear for my not-old-enough-to-be-vaccinated-yet children who are back in school. Fear that schools will not be able to stay open as the Delta variant sweeps through. Fear of the life choices I've made - the way they've produced their own unyielding realities. Fear for the level of chaos, death, and destruction rampant in the world today. Maybe you have been feeling it too?
Yesterday, my thirteen-year-old son said it feels like the world is falling apart. My fifteen-year-old daughter replied, "It always feels like to world is falling apart."
He is right. She is right. It is both - the falling apart and the fear of falling apart and the reality that both are and ever shall be. And, so, we acknowledge the fear that is with us, like the sleeping cat in the chair beside me.
But, as Palmer says, we don't have to speak from that place. We don't have to live from there either. While fear may be present and it is not good to pretend it isn't so, it also can be a blinding and binding place to live from. As so, we're invited to step out, even in the midst of great darkness. To beat our wings and soar as though even darkness cannot separate us from the love of God which is in Christ Jesus. Or, to put it another way, the darkness cannot separate us from the love of God that is with us and for us.
So, name your fears Little Ones, then set them down to rest on the table or chair beside you. Do not be afraid to step out into this dark night, for you were made to shine.
With love & joy,
Kelly
Posted by kchripczuk No comments:
Email ThisBlogThis!Share to TwitterShare to FacebookShare to Pinterest
Labels: darkness, fear, love notes

Love Leads Us Out, Love Draws Us Back Again 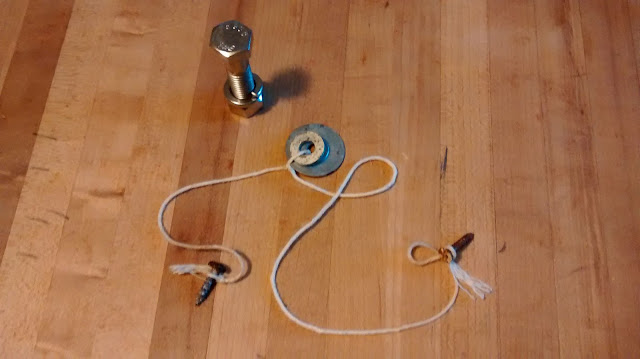 * This piece of writing is 6 years old. Much has changed in those years and much has stayed the same.

All four kids took turns rummaging through the large metal pot that my husband uses to store old nuts, bolts, washers, and nails. After choosing their wares, they made robots, tiny friends composed of wing bolts and screws. They each made three or four and named them based on appearance and abilities.

Then Solomon made a “weapon,” something like nunchucks, by tying nuts on either end of a piece of string. He practiced throwing it until he could get it to wrap around a tree. Then, the other kids joined in with their own string and nut creations. Later, Solomon tied a washer in the middle of the string and, pulling the two ends taunt, observed the washer spinning first in one direction, then another.
This fall, my four kids will be spread among three different schools. Two will climb on separate buses within minutes of each other, heading in opposite directions. Then the other two will ride with me in yet a third direction for drop-off.
I have three separate Back to School nights listed on the calendar, all requiring babysitting. There are two other Meet the Teacher events that include some, but not all, of the kids. I have large sheaf of papers pinned to the bulletin board filled with teachers’ names, room numbers, and other essential information.
I feel a bit like that nut tied in the middle of the string, spinning first in one direction, then another, as my kids fly out into the world. How lucky we've been, piled together for the summer, like those nuts and bolts in that old, metal pot. We've clattered around the house and yard together, merging and separating at will. With fall, we're all flung a bit wider, but I'm grateful, always, for the bonds of love and mercy that draw us back together again.
Posted by kchripczuk No comments:
Email ThisBlogThis!Share to TwitterShare to FacebookShare to Pinterest
Labels: love

What do you see? 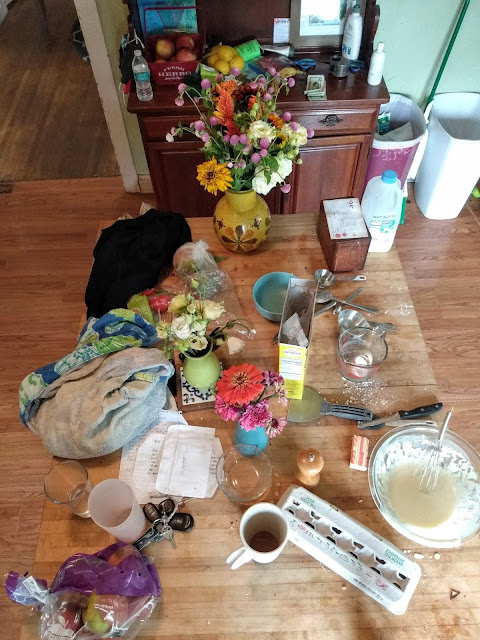 I took this quick picture of our kitchen island the other day. I think it was the morning after my 9 year-olds had their first sleep-over. But, really, the picture might be much the same on any given morning or afternoon. This countertop is a magnet for clutter. I don't have to look at it for long before I feel a rising tide of stress and overwhelm.

I see wet swim towels and pancake batter going bad.
I see my oldest son's dirty shirt, dishes to be washed, and papers that defy categorization.
I see the lemons we keep forgetting to turn into lemonade; I see a hundred places for the flies who pass through our broken screens to land.
This is what I see and all of it is true.
But if I take a deep breath and widen my lens, I also see flowers from a friend (the product of my daughter's first ever summer job). I see silly notes exchanged between my husband and son. I see heaps of fresh produce and a home that's lived in. I see food for our mouths and evidence of friends (for our souls) and the fulness of life lived in the here and now.
This is what I see and all of it is true.
The clutter is real, as well as the stress I feel in trying to tame it. The presence and abundance are real too. Both. There is light and darkness here on this kitchen island - blessing and curse, abundance and scarcity.
I don't seek to pretend one isn't real and cling to the other. I'm not after some pollyanna point-of-view. I'm hoping instead to practice, now and again, the art of widening my lens.

What more is there to be seen? What's there but not apparent at first glance? How does a wider lens allow a more deeply grounded sense of reality?
Posted by kchripczuk No comments:
Email ThisBlogThis!Share to TwitterShare to FacebookShare to Pinterest
Labels: contemplation, home life, mess, presence, vision 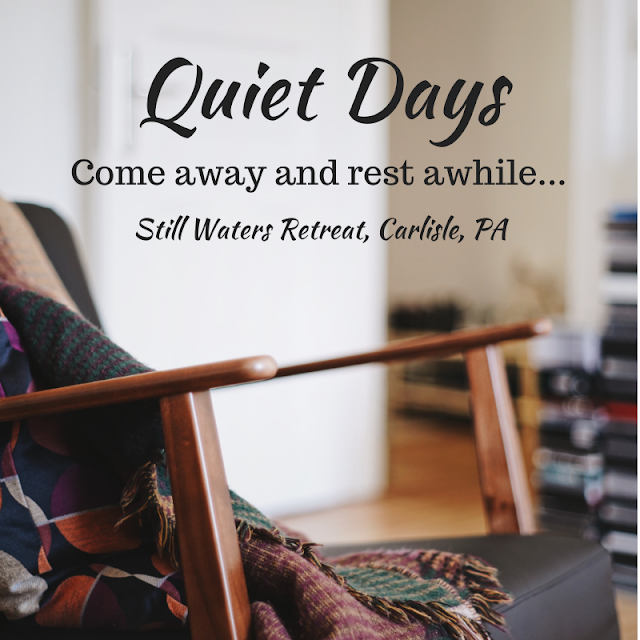 Words can satisfy your mind, but silence satisfies your soul. - Nitin Namdeo
Join Spiritual Director, Kelly Chripczuk, for a Quiet Day this fall at beautiful Still Waters Retreat House. This day is designed to be low-program and offer ample time and space to dwell in the depths. Whether you need rest, time in nature or space to journal and pray, Quiet Days offer a container for you to come as you are - even, and perhaps especially, if you don't know what you need.

Sample Schedule (subject to change):
9:00 Arrive and Settle In (beverages and snacks available)
9:30 Welcome and Centering Prayer or Lectio Divina
10:00 Open Retreat Time
12:00 Lunch (BYO, lunch may be taken in community or in silence depending on your preference)
1:00 Open Retreat Time
3:00 Closing Graces
3:30 Departure
When: Friday October 1
Time: 9:30 - 3:30

Registration deadline: Monday, the week of the retreat
* Special Notes *

Quiet Days emphasize time for silence and solitude and will be held in a contemplative atmosphere. Though you will hopefully see and meet some new faces, the primary aim of the day is to offer time to connect to yourself and listen for the voice of the Divine. If you're looking for conversation or intellectual stimulation, these days won't be a good fit for you.

ALL are welcome to these days, regardless of race, gender or sexual orientation. Contact me at Chripczuk.kelly@gmail.com with questions.
Register using the secure Paypal link or email me to inquire about other forms of payment.
Posted by kchripczuk No comments:
Email ThisBlogThis!Share to TwitterShare to FacebookShare to Pinterest
Older Posts Home
Subscribe to: Posts (Atom)